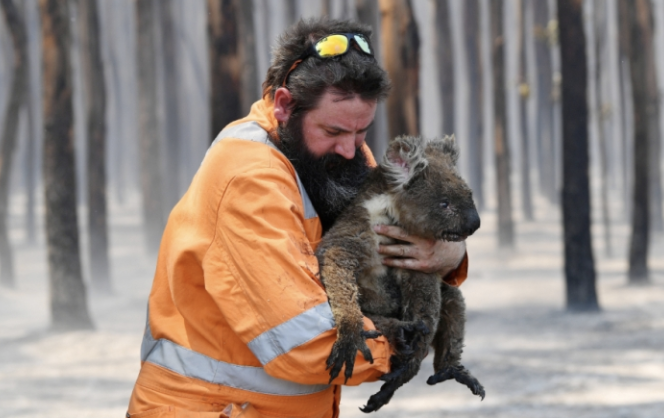 Posted at 13:33h in Celebrities by Gigi Manukyan 0 Comments

The bushfires that have been burning throughout Australia have been devastating with about 26 million acres burning, half a billion animals dead, killing 28 people, and 5,900 buildings destroyed. With summer beginning, record-breaking heat is approaching the country, causing the fires to stay with no hope of recovery any time soon.

During the 77th Golden Globes ceremony on January 5th, the Australian bushfires took center stage with many winners and presenters speaking up about the devastation that continues to overwhelm the country.

Australian native Russell Crowe, who won for best actor in a mini-series or movie made for television, couldn’t attend because he was in Australia helping protect his home and his family. He released a statement that Jennifer Aniston read saying, “Make no mistake, the tragedy unfolding in Australia is climate change-based. We need to act based on science, move our global workforce to renewable energy and respect our planet for the unique and amazing place it is. That way, we all have a future,” which was met with positive feedback from the crowd.

Ellen DeGeneres, who was awarded the Carol Burnett Award for her excellence in television mentioned in her speech about all the animals that have been lost because of the bushfires. Cate Blanchett, another native from Australia, gave a shout out to all the volunteer firefighters who have been working nonstop to decrease these fires from spreading. The biggest voice was notably Joaquin Phoenix, who won for “Best Actor in a Drama,” who used his platform to call out his peers in an expletive speech that needed to make an actual change for the planet instead of offering prayers on stage. At the end of the award show, host Ricky Gervais urged viewers to donate to help battle these bushfires.

While the Golden Globes was the perfect opportunity for celebrities to use their platforms to urge their peers and viewers to donate, other notable celebrities have used their social media platform to give out resources for the fire relief efforts. Others have also revealed how much they did donate to help inspire the public that anything helps. From Nicole Kidman, also an Australian native, and her husband Keith Urban donating $500,000, to Kylie Jenner donating $1 Million, the list of celebrities helping out goes on.

Some influencers have also been creative on how they raise funds for the fire relief such as LA-based influencer and sex worker, Kaylen Ward, known as The Naked Philanthropist on twitter, raised over $1 Million in three days by offering direct messages of her nudes to those who donated at least $10, screenshot their receipt for proof and sent them directly to her. Her twitter post instantly became viral with an overwhelming amount of users donating, being successful with her efforts to raise past her goal.

The devastation these bushfires that continue to engulf Australia is enormous, but we can do something to help decrease the crisis. Listed below are the following charities that you can donate to support the fire relief and help the victims and the animals:

Directly to the fire departments in Victoria and New South Wales