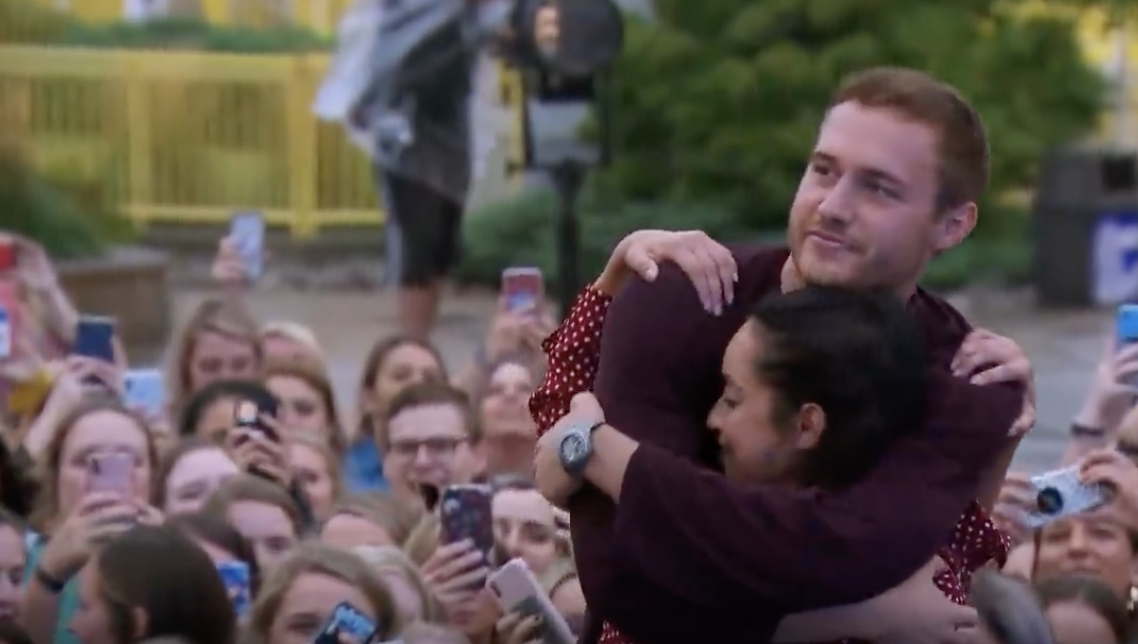 We’re back for another episode of drama and tears.

Chris Harrison enters the mansion and tells the girls that Peter is gone and left town. (EXCUSE ME?)

Chris explains that they will all be going to a city of art, culture, and rock and roll — CLEVELAND.

As someone that used to live in Cleveland, Chris Harrison was right about the rock and roll—that’s about it.

Peter’s big fact about Cleveland is that Clark Kent was “born” here. Sure, I guess that’s history.

Deandra brings out a date card for Victoria F.

Peter takes Victoria on a skydiving ride at Cedar Point. I told y’all, 75 percent of these dates would be aviation themed.

Victoria F. and Peter are eating in a diner and she cheers them, “Cheers to our sons having hot moms and successful dads.” I guess that’s a toast.

Victoria says she wants boys—specifically 4 kids. Peter says he wants 2 or 4 because he loves amusement parks. According to him, if you have three kids, then one of them sits by themselves and that’s sad. A really strange way to decide how many kids to have, if you ask me.

Peter decides to surprise her with a Chase Rice concert, who unbeknownst to him, is Victoria F.’s ex.

Peter says it’s the coolest date he’s been on, which is about to get ruined really quick. Hysterically crying, Victoria F. tells Peter and he’s completely understanding.

Since everyone is on the date card except for Kelsey, she gets the 1-on-1 date by default.

We’re at the FirstEnergy stadium with footballers, Josh Cribbs and Hanford Dixon, and the girls are going to compete in a football game… Oh boy! Tammy’s going to dominate this.

Victoria says she is going to sit out the football game (didn’t know that was even an option) with the girls because of her back, and I’m confused as to where all her mysterious injuries are coming from.

The game ends as a tie, but for some reason the Eliminators team are acting like they lost by 20. Meanwhile, the Killer Bees are toasting with champagne.

The girls are complaining about the drama of Victoria P. stealing Peter. Alayah, who was eliminated last week, walks in. These ladies have bigger issues to worry about.

Peter pulls Alayah and Victoria P. aside because Victoria P. is going to the grave saying that she doesn’t have a relationship with Alayah. Alayah maintains that they went to Vegas together and are in several group chats together—changing the game.

Peter asks Alayah to come back and she accepts. He brings her over to update the girls and hands Alayah the group date rose. Oh so Peter really wants these women to riot, huh? Is that allowed when she wasn’t even on the group date?

Peter takes Kelsey on a date around Cleveland and updates her on the Alayah drama. She’s weirdly cool about it, which is surprising considering she was drama-central with Champagnegate.

Peter says that he wants to know all the good and bad stuff about Kelsey. She tells him she gets her characteristics from her parent’s divorce. She learned about the divorce before her mom knew when she came home one day in 7thgrade, and she found a letter from her dad to her mom and his wedding ring on the letter. DARKKKKK STUFF.

Victoria F. is mad at Alayah because she told the girls in the house about the Chase Rice drama, which is a bad move on Alayah’s part— these girls already aren’t your biggest fan.

The girls act like this was a deliberate, vindictive move, but this house is gossipy enough as it is. I, too, would just assume that everyone already knows all the dirty laundry on Victoria F. (and boy is there a lot).

The girls riot against Peter because they literally are covered with bruises from the football game. He ignored them and gave Alayah,who was already eliminated, a rose.

Side note: the fact that Peter is so fickle is really messing up my bracket.

We’ll continue next week on the rose ceremony, who do you think is going home next week?