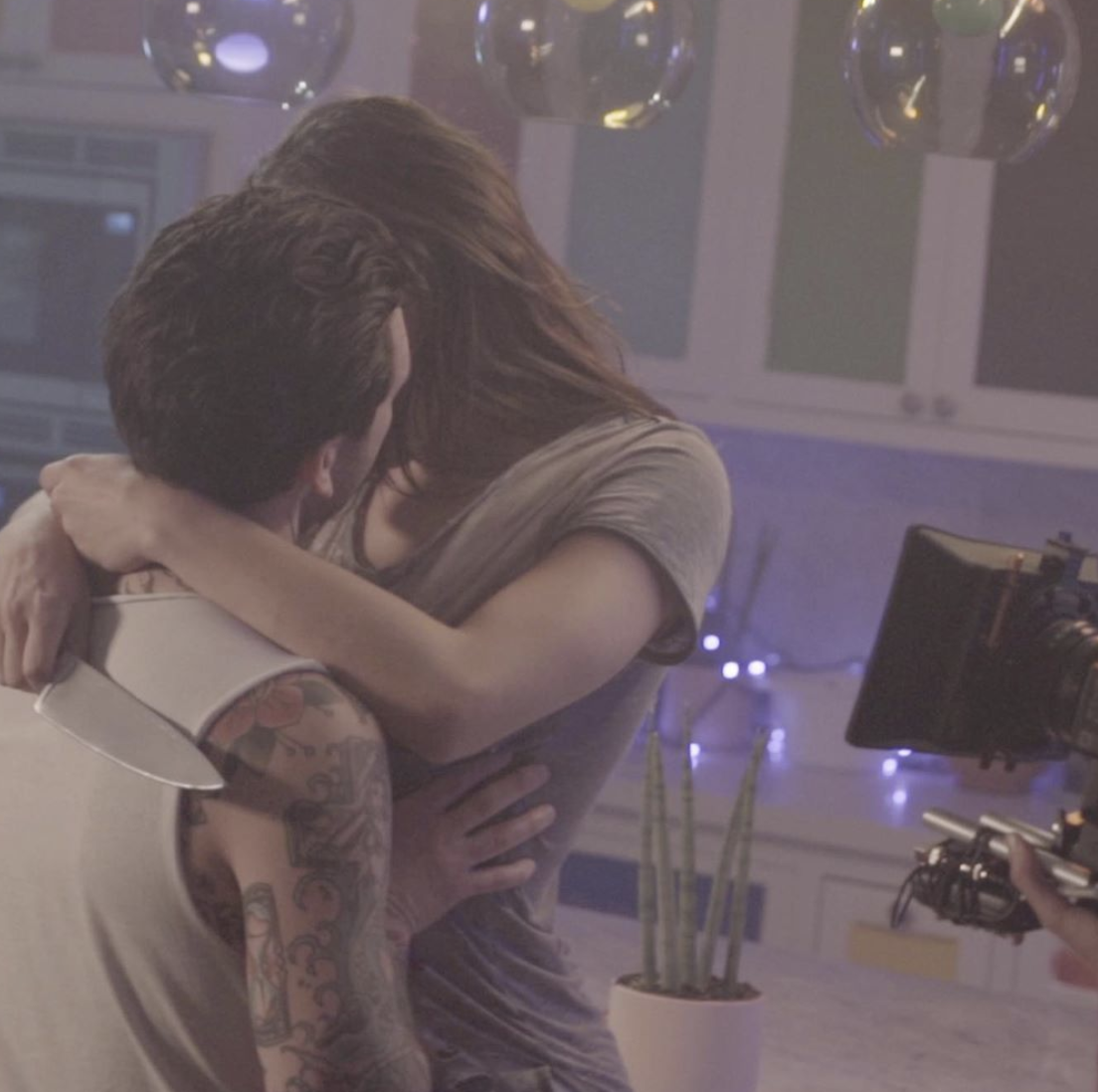 Got the giggles out of your system?

But now… let’s talk about the film aspects. Because… wow.

First, we need to discuss the visuals of the whole ordeal. The short was clearly an experimental piece of filmmaking, and often reminded me of the movies of the 60’s, spearheaded by directors like Jean-Luc Godard. Things like the overlaying audio and the extreme, long-holding close-up takes were very much reminiscent of titles like Contempt and Breathless. But where the French New Wave broke rules to make its audience think, or test the limits of cinema’s status-quo, Her & Him breaks rules to… break rules? I think?

The close camera hardly ever broke away for long or establishing shots, making things claustrophobic and distracting. The jump-cuts, which frequently broke the 180º line (the imaginary line of sight that helps with visual continuity), constantly reversed the characters on screen. There was no sense of space for most of the run time, and it was distracting trying to mentally configure the set while the camera was up in the actors’ noses. The audio constantly swelled into overbearing static, which can be effective if used sparingly. Key word “sparingly.” One of the reasons we have conventions like extreme closeups and disjointed audio is to give an unnerving reaction to the audience. But here’s the kicker: there needs to be a balance of normalcy to offset the unsettling, or else it all just becomes noise. Example: remember Black Swan? Do you remember how unsettled and creepy you felt watching it? How unnerving it was to watch Natalie Portman unravel mentally while striving for perfection? Now imagine if that film was just the character’s hallucinations. After a while, you’d become numb to it, and the truly disturbing aspects of the movie wouldn’t have the same punch.

It’s the same here. From the first frame of Her & Him, we’re treated to uncomfortable visuals that confuse and displace the audience. Characters talk off screen, images blur and duplicate, and the camera fluctuates in exposure. These techniques aren’t themselves “bad” per se, but piled on top of each other without a moment to breathe or no real message behind them, it becomes an armature experiment in epilepsy detection—that’s not even mentioning the abysmal writing and dialog of the whole thing.

Ok, yes, it’s porn, but we’ve already judged it based off of those merits. If these actors and this dialog were in a major motion picture, it would get pulled from theaters after a two week run. The girlfriend threatening her boyfriend with a knife and expounding on how hot she finds manslaughter is strange enough, without lines like: “You don’t understand? How can you not understand my need for blood?” That line in particular read like a bad Twilight fanfiction. Even the establishing banter like the girlfriend coming home with food is weirdly robotic. This may be a personal nitpick, but she wakes him up with a burger and fries on a plate (not in a paper bag or some other form of disposable dishware that would compliment the fact that it’s fast food), and makes him a cup of tea. The dialog hinted that he was giving up coffee which was why tea was substituted, but on that note, who has coffee with a burger and french fries and doesn’t live in 1955?

Every “normal” choice these people make is mind-bogglingly weird or contrived. For instance, he borrows her phone only to immediately find a Google search for “how to kill your boyfriend and get away with it.” I actually stopped the video and laughed. The plot twist of Her & Him is also inorganic and clunky—it doesn’t really feel like a twist at all. Apparently, the girlfriend had gone out with a friend of hers, who had conveniently borrowed her phone and searched for that article. Yet, left it on the search page and not the article itself? This would all be well and good if the horror aspects were all psychological in nature, but it doesn’t erase the fact that the girlfriend actually tried to stab her boyfriend with a knife, which she only missed because HE ducked out of the way. Really defeats the purpose of: “Oh, she wasn’t actually trying to kill him she’s just weird! Womp womp!” On top of that, the friend who looked up that article apparently didn’t read it in full, because it ends with her just straight up stabbing her man to death on the floor. Pretty sure I’ve seen enough CSI to know she’s not getting away with it. She got the first part down, I guess. Points for trying.

I could go on, but I do feel the need to express one last thought: I don’t actually hate this film. It’s a convoluted mess that’s a little too affects happy, but you know something? There’s effort here. And if Bella Thorne is seriously considering directing, there are worse projects she can attach herself to. Make no mistake, Her & Him is hot garbage, but it’s fun hot garbage, in the same way as Rocky Horror or Plan Nine, just with 100% more penis. I have a feeling this is going to fall into those same cult circles, and perhaps could even be a fun retrospective should Thorne’s career blossom beyond it.