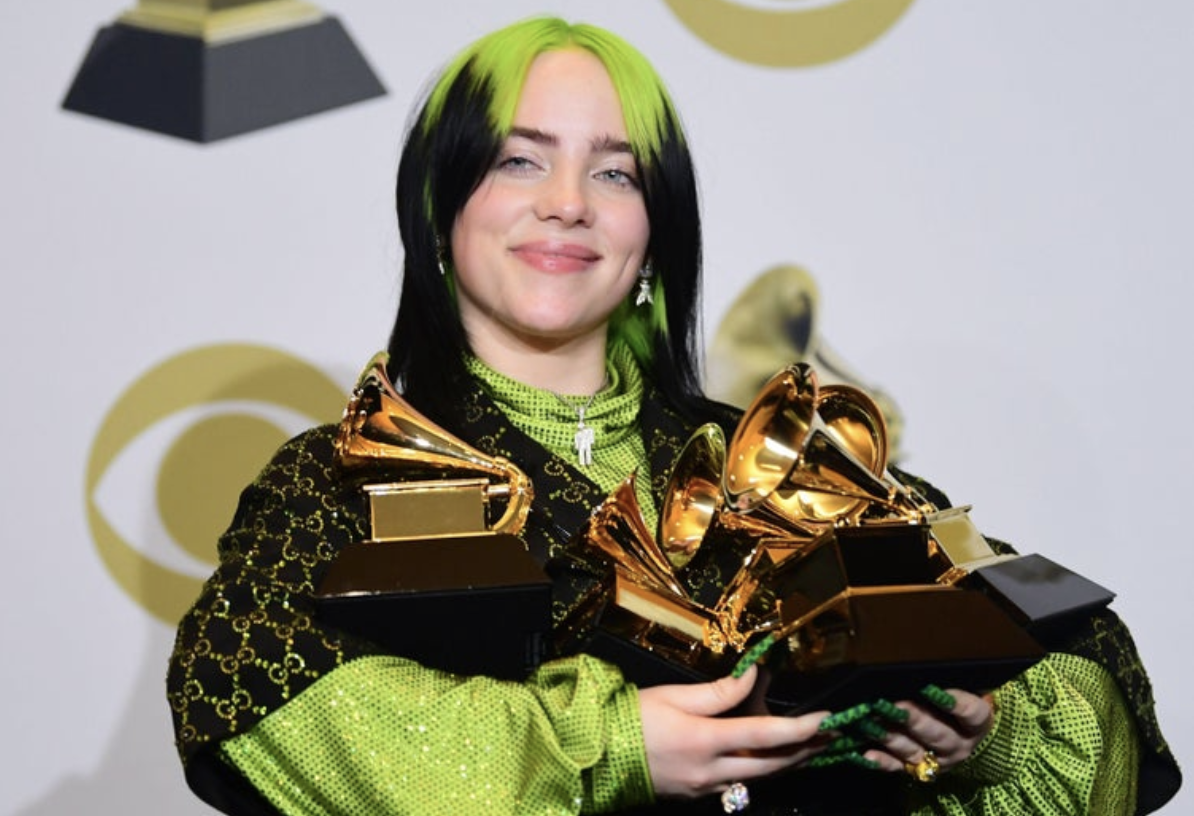 What started in her brother’s bedroom as a way to mess around and make music has turned into five GRAMMY awards for singer/songwriter, Billie Eilish. At only 18, Billie Eilish has already made history with the success she has had at such a young age. Billie Eilish and her brother Finneas have been making music together for years. She was first noticed in 2016 with the release of her song “Ocean Eyes,” which was written and produced by Finneas. In 2017, Billie Eilish’s EP Don’t Smile At Me reached the top 15 in the U.S.

The siblings recorded her album WHEN WE FALL ASLEEP, WHERE DO WE GO? with no fancy label or recording studio—in Finneas’ bedroom. Since the albums release in March of 2019, Billie Eilish has gotten even more attention. The album hit number 1 on the Billboard 200 chart and hit song “Bad Guy” became her first number 1 song on the Billboard 100 chart. Billie Eilish was also crowned Billboard’s “Woman of the Year.”

Her green hair, unique style, and dark songs are bringing a whole new change to pop music, and her fans love it. You won’t find Billie Eilish wearing a typical outfit at any performance or show. She wears baggy clothes so no one can sexualize or judge her,—a pretty mature decision for an 18 year old. Eilish’s look is just something else to love about her, and puts the focus on her lyrics and voice rather than her wardrobe and body.

Billie Eilish was nominated for six GRAMMYs, the second most nominations of all artists this year. Billie Eilish is the youngest and the first female to win all four of the General Field categories at the GRAMMYs in one year. WHEN WE FALL ASLEEP, WHERE DO WE GO? won her Album of the Year and Best Pop Vocal Album. “Bad Guy” was awarded Record and Song of the Year. Billie Eilish also won Best New Artist.

Other awards Eilish has taken home this past year are two American Music Awards. One for New Artist of the Year and another for Favorite Artist Alternative Rock. At the MTV Music Video Awards Billie Eilish won Best New Artist and Best Editing for the video for “Bad Guy.” She is also in the Guinness World Records as the youngest female to reach number 1 on the UK albums chart. Being the youngest solo artist to win Album of the Year, Billie Eilish will also be a Guinness World Records title holder for that.

Billie Eilish began her When We Fall Asleep tour at Coachella in April 2019 and ended in November 2019. She announced on her instagram the Where Do We Go Tour. It is set to start in Miami in early March of 2020 and end in London on July 27, 2020.

Billie Eilish and Finneas have made their mark on the music industry already. They dominated their first GRAMMY appearance and earned themselves awards that made history. Obviously, Billie Eilish has found a lot of success in the past few years, and we should expect to hear a lot more from the singer in the future.