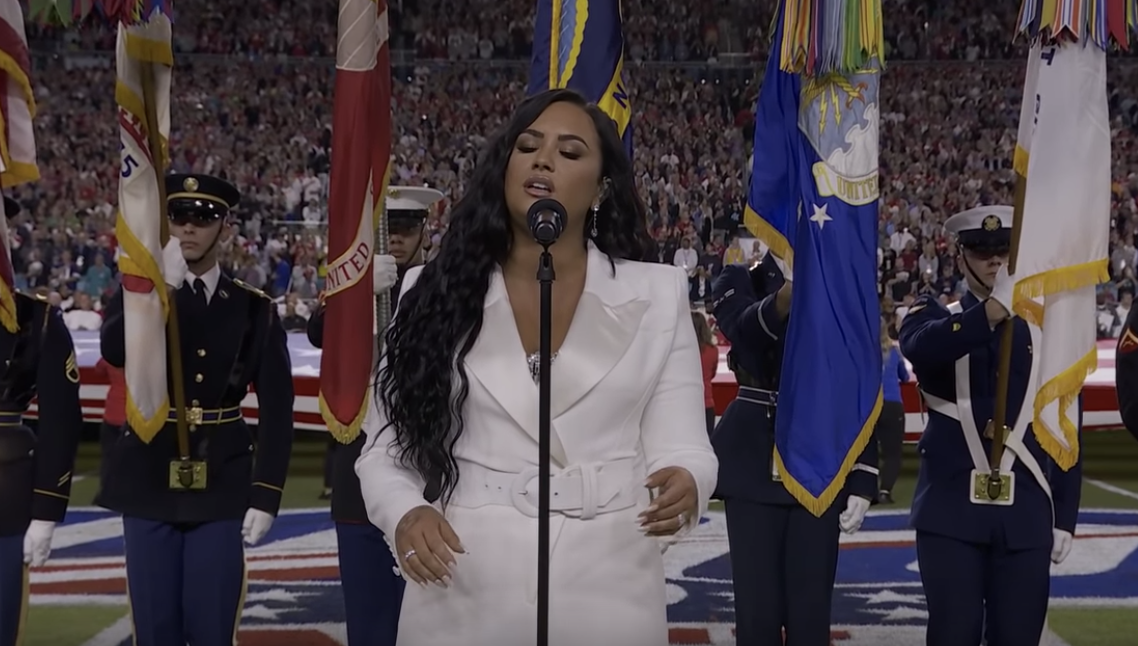 This past Sunday, the Kansas City Chiefs and 49ers faced off in Super Bowl LIV, but before all eyes were on the players, they were on Demi Lovato. If you attended a Super Bowl party, then you might have heard a bit of a buzz during Demi Lovato’s National Anthem performance. All the excitement had nothing to do with how well she performed, but instead the length of her singing. The Super Bowl is the most watched sporting event of the year. When it comes to betting lines in Las Vegas, there is no limit to how ridiculous some of the betting lines have become over the years. From the coin toss to the color of Gatorade that will be thrown on the winning head coach, you can try to win money a thousand different ways. Just another way to add excitement to the game if your team isn’t playing, or even if you could care less about football. So, betting on how long Demi Lovato would take to sing the National Anthem became another one of those betting lines. SportsLine had set the odds at -220 for the song to go over two minutes and +180 for the national anthem to go under. She went under. Clocking in at an unofficial 1:50 according to Sportsline’s live tweet which shortly after tweeted a crowd of gamblers that bet the under two minutes going wild. This two minute number was based on her previous Star Spangled Banner performances at other sporting events over the last few years. She went under two minutes at four of her five previous performances, coming from three World Series games and an NFL Thanksgiving game. Though these performances were under two minutes, the last time she performed the song was at the boxing mega event Floyd Mayweather vs. Conor McGregor back in 2017, where she clocked in at 2:11, creating some drama for the sports gamblers.

Though Demi Lovato had a great performance, it was outshined by the fun of gambling on how long she would take to belt out our nation’s anthem. This sparked interest in what some of the other prop bets on this year’s Super Bowl were. Gridironexperts.com listed their ten most ridiculous prop bets from this year and I picked my favorites. The number of Donald Trump tweets, which company will be the first aired commercial after the kickoff, and the most ridiculous of all being will any player finish with exactly 69 yards? In case you were wondering, I don’t know how many times Trump tweeted on Feb 2nd, but I do know that he showed a little confusion on one tweet congratulating the wrong state on their Super Bowl victory. For the record, Kansas City is in Missouri, not Kansas. We shall see what next year Super Bowl prop bets will be trending and hopefully the commercials will be less cringe worthy, so at least the people who hate football can have some source of entertainment.