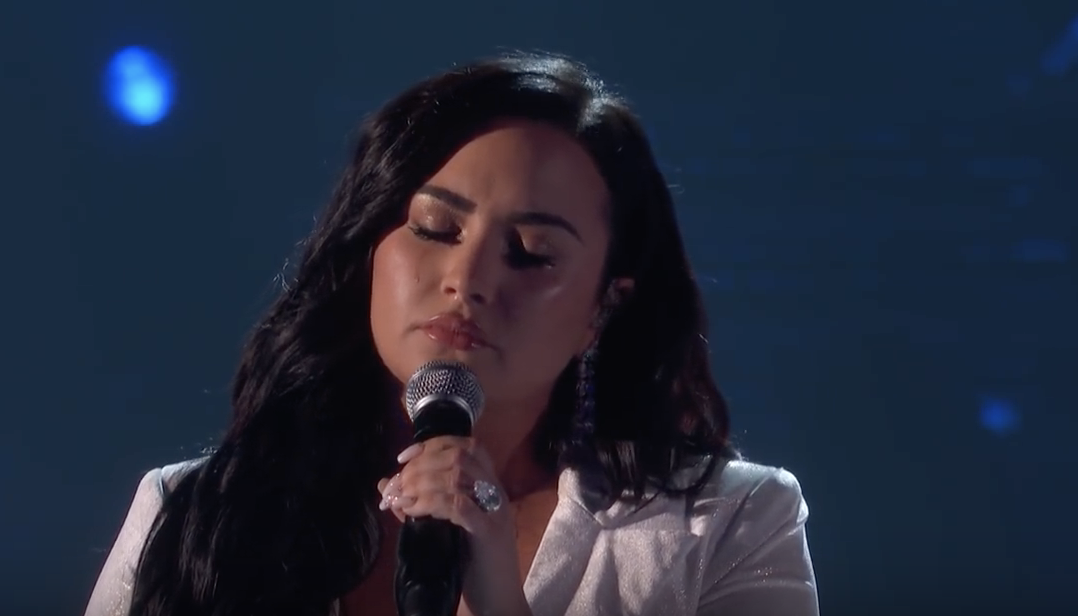 In July of 2018, Demi Lovato was rushed to the hospital after a drug overdose that nearly killed her. As part of her journey back, Lovato returned to the stage for the first time since the overdose at the 2020 GRAMMYs, where she performed her new record “Anyone,” now available for stream and purchase. She wrote the song just days before the overdose, and the lyrics are very personal to Lovato.

Lovato mentions how the song is a cry for help during her interview with Zane Lowe on Apple Music’s Beats 1. She said during the interview, “And you kind of listen back to it and you kind of think, how did nobody listen to this song and think, ‘Let’s help this girl?'” After starting to cry just seconds into her GRAMMY performance, Lovato gathered herself and restarted the vulnerable and emotional song.

The song opens, “I tried to talk to my piano, I tried to talk to my guitar, talk to my imagination, confided into alcohol.” Lovato is very open about her drug and alcohol problems in the song and during the interview. She tells Lowe how she wishes she could go back in time to help the version of herself that overdosed. However, she knew while sitting in the hospital that if she ever came back, she wanted to sing the song “Anyone.”

With tears falling down her face during the GRAMMY performance, she sings “I feel stupid when I sing, nobodys listening to me. Nobody’s listening. I talk to shooting stars, but they always get it wrong, I feel stupid when I pray, so why am I praying anyway, if nobodys listening.” However, a year and a half later from writing these lyrics, Lovato expresses her newfound faith in God. Lovato’s new faith has helped her bounce back and find her purpose in life. It wasn’t even until recently that Lovato started leaning on faith. She said “I shied away from church for many years. I didn’t feel welcome. I was also, like, questioning my sexuality.”

Luckily, Lovato found a place in Los Angeles that accepts her for who she is—no matter who she loves. She talks about her sexuality during her interview and how she is really not sure what she wants. Lovato told Lowe that she hopes to start a family in the next 10 years, but she is not sure if she would do it with a man or a woman.

Performing at the 2020 GRAMMYs, starting a family, and the release of the song “Anyone” are part of Lovato’s comeback. Now that her first performance is over, Lovato can focus on her next big performance at the Super Bowl. Lovato is singing “The National Anthem” at Super Bowl LIV on Sunday. She knows that her adrenaline from performing at these events will be high, but she also is prepared to find a way to cope with the lack of adrenaline during down time.

The singer mentions how she has been through a lot and learned a lot in the past year, and she has become more comfortable talking about her problems. She is planning on releasing more emotional and raw music that tells more of her story for her fans. So expect to hear more from Demi Lovato in the near future.