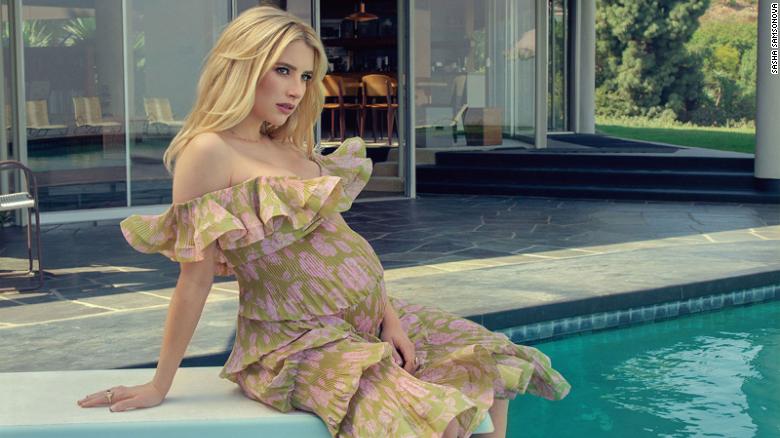 23 Nov Emma Roberts is the First Pregnant Woman to Grace the Cover of Cosmopolitan!

Actress Emma Roberts became the first ever pregnant woman to grace the cover of Cosmopolitan magazine this week.

Roberts was interviewed by her friend and fellow writer, Stephanie Danler for the magazine. The two discussed motherhood, Emma’s struggles with infertility, and growing up in Hollywood.

The article is out on Cosmopolitan website now, and will be in the December/January issue of the magazine.

This is Emma Roberts’ first child, a baby boy, with boyfriend Garrett Hedlund, 35. The pregnancy was announced in August via Instagram. 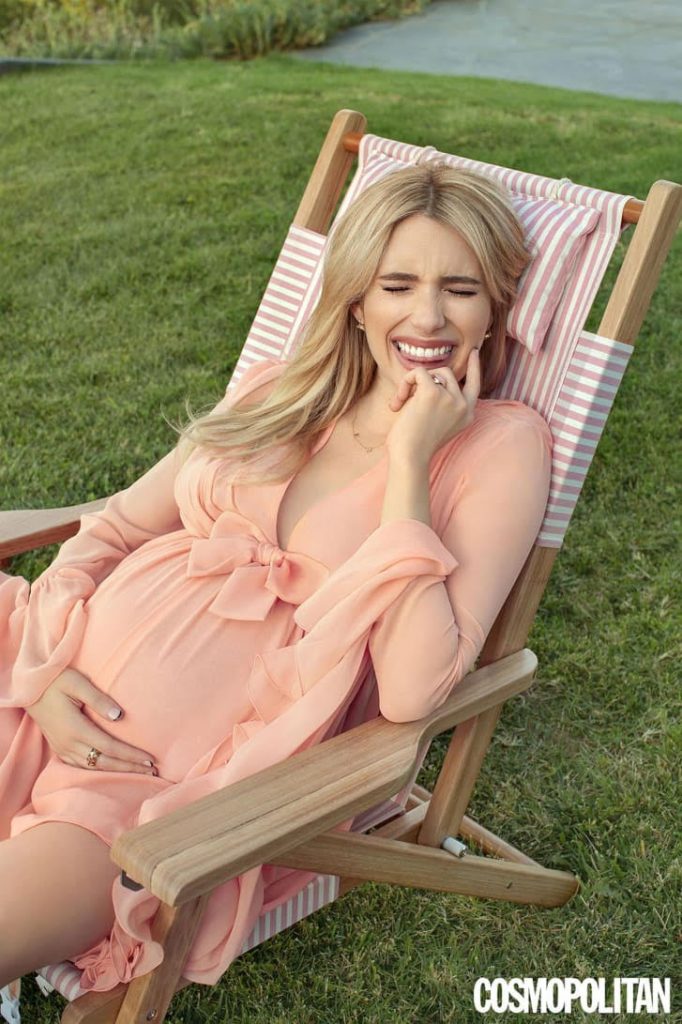 The “Holidate” star looks amazing in her photos for Cosmopolitan. They were taken by photographer Sasha Samsonova.

In one photo, Roberts wears a soft pink dress while sitting on a pool chair, showing a softer side of herself during pregnancy.

Stylists showcased her adorable bikini bump. Roberts can be seen standing next to a pool in a black bikini, with bump in full view. She looks like a strong, powerful mother-to-be.

Another photo shows Emma holding a croquet mallet in tiny white shorts and a white crop top. This is a look of Roberts’ that we are all too familiar with thanks to her mean girl persona in many of her films. 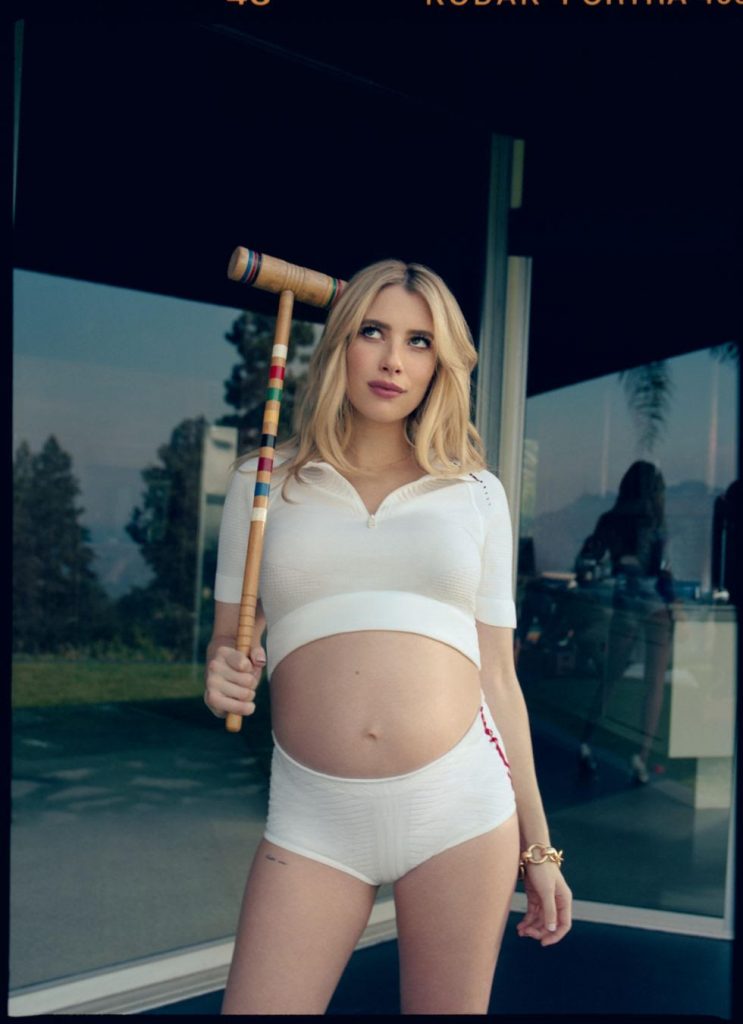 In the interview for this cover, Roberts was asked “Do you feel grown up?” to which she responded “ It’s funny, because I think people to this day think I’m 19, even though I’m turning 30. I don’t know if it’s about growing up as Julia Roberts’ niece or if it’s because I’ve been doing this since I was so young that people see me as younger,” the actress shared. “To see my body change inside and out so drastically has been a wild experience. Surprising and beautiful,” she said. “Then again, some days I feel like I’m being hijacked by something.”

Roberts shared that there were doubts on whether she could even get pregnant after she was diagnosed with endometriosis in her late twenties, and she froze her eggs as a precaution.

“It sounds cheesy, but the moment that I stopped thinking about it, we got pregnant,” she said. “But even then, I didn’t want to get my hopes up. Things can go wrong when you’re pregnant.”

Roberts was also asked how she feels about raising a child under the gaze that comes with fame.

“I was thinking about it this morning because there were paparazzi following me. I had forgotten my computer and my coffee—which, by the way, pregnancy forgetfulness, I’ve got it really bad. I had to turn around and go home and I was so frazzled because I didn’t want to be late. And these guys were following me very close to my car, driving in a way that made me so uncomfortable,” said Roberts. “It put me in such a bad mood. I was excited to talk to you—I had woken up at the right time and I felt like I had a handle on my day, then to forget what I needed and be followed by these guys…I was thinking, What am I going to do when this happens when he’s here? It’s something that I don’t have the answer to yet. I signed up for this, but he didn’t.” 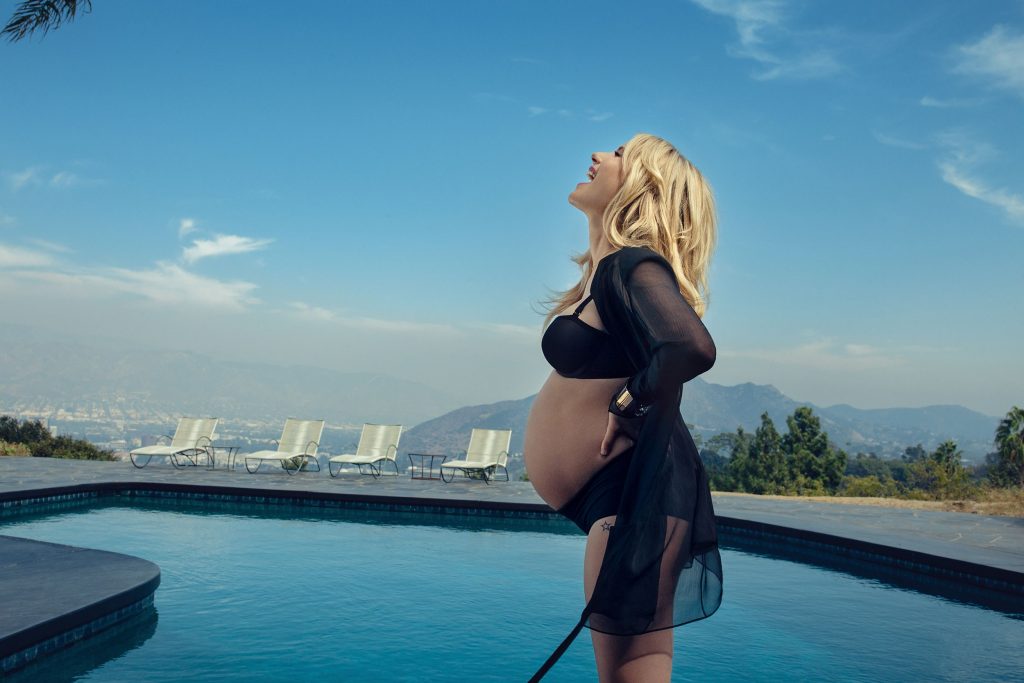 Nonetheless, It seems that even under the circumstances of raising a child in the spotlight, Roberts is going to make an absolutely incredible mom.

What was your favorite look in Emma’s cover spread? Drop a comment below and let us know!