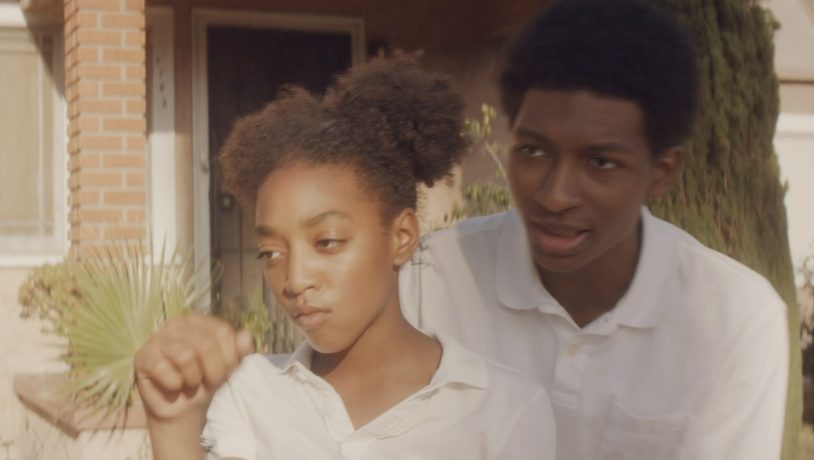 27 Oct FEMALE FILMMAKERS TO LOOK OUT FOR

It was a warm evening in autumn. You stumble upon a steep hill where one walks up and becomes short of breath. Once you reach the top of the hill, all of the air comes back into you knowing you have entered the AFI’s Louis B. Mayer building, named after one of the most important movie moguls of the 20th century. Upon entering, you will discover the Women In Media inaugural event for CAMERAderie where they were screening three short films created by their production team.

Everyone there was dressed from casual to business attire. Movie posters decorated the event with names of the alumni who worked on the productions. There was an array of appetizers along with different wines to choose from. After mingling, everyone was led into the screening room to get seated.

Out came the Executive Director Tema Staig, a red-headed woman who was passionately talking about Women In Media’s mission to insure at least half of all production teams are female. A very charismatic moderator, she briefly described the journey of the organization and how they were able to build themselves up through the support of many sponsors, including NBCUniversal. Staig says she would like the program to “go beyond what the program is,” in which she would like to change the entire film landscape beyond to what the program is already doing for women.

The first short film, Illipino, follows a young Filipino girl who wants to show others her passion for dance but runs into boys who are prejudiced against her for being a girl. She is able to surprise them that makes the group of boys reconsider. What this short film does is display an ethnic group that is rarely portrayed in American film. This short film inspires every viewer to just love who they are and celebrate what makes them different. Once the individual figures that out, nurture it and show the world what you are made of.

The second short film was called Cherry Lemonade. An innocent and whimsical sounding title right? The short paradoxically displays the tougher side of life where everything is not always as sweet and dandy. The story follows our main character who is learning from her brother how to fight. She sees the neighborhood cheerleaders who are sipping cherry slushies. Due to their financial circumstances, she is unable to buy one. She later acquires some money and after disobeying her brother by stealing his bike, she goes to the local liquor store only to find out she doesn’t have enough money for the drink. A suspicious character covers for her but signals for something in return. The girl later discovers her worst fear and realizes that life is a constant learning game. The story teaches the viewer to stay honest and always be aware of you surroundings. Never discourage yourself from getting what you want but don’t trample or betray people along the way.

The final short film, Blood and Glory, was arguably the most powerful short. The story follows two homeless veteran women just trying to turn their lives around. One of the women starts her menstrual cycle right before her job interview. Upon arriving, she learns the management has changed and made her lose the job opportunity. She leaves disillusioned and hopeless despite her friend telling her not to lose hope. They both enter a convenience store which almost tempts our main character to steal some tampons. Her friend witnesses this–although she puts them back–and is shocked by the idea that her friend would even steal. They leave the store only to discover their cart stolen. The short concludes with our two characters hugging each other for comfort, one hands over a piece of the American flag to use as a pad. This ultimately is interpreted as a slap to the face to America in which the government does not give enough to those who have served the most to their country.

These three shorts were extremely entertaining and powerful. After the screening, the three directors Satinder Kaur, Aisha Ford, and Maritte Go describe their inspirations for their stories. Staig said that about the films, “They look and sound really great. That’s what happens when post is at NBCUniversal.” Each of the directors were inspired by their personal experiences. Kaur said for her film Blood and Glory, “Access to personal hygiene is so key,” after mentioning that she was a veteran herself and describing her experience volunteering with the homeless at Skid Row. She described that women didn’t have access to basic necessities for hygiene such as pads. Ko said that she spent a lot of time in her youth at church parking lots which was served as the backdrop for her short.

“The things that sticks out to you is what you should foster,” said Ko.

Women In Media is trying to have more female representation in the film industry. One of the directors said after being asked about the recent conference they had, “your story matters, that’s amazing to me.” They are trying to introduce a whole variety of stories that may not be as commonly told by the average Hollywood director. With these films, there is a bright future for these female filmmakers. Ko said her short now has a feature script she’s pitching to studios. Ford is continuing to make stories about being “brought up in the hood” as she described it. Kaur is currently working on post for another short film. Knowing that this organization has helped these three ladies showcase underrepresented communities inspires other filmmakers to follow what their passionate about and to not be afraid to create content based on who you are.