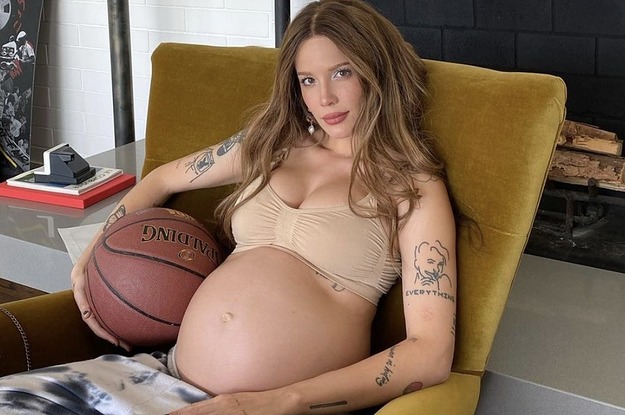 Posted at 15:31h in Celebrities by Paige Burruto 0 Comments

There’s a new mom is in town! Halsey gave birth to her first child, Ender Ridley Aydin. The singer and her boyfriend, Alev Aydin welcomed their child to the world on July 14th.

The couple announced they were pregnant in January, when the singer posted pictures of her growing belly on Instagram, with a rainbow emoji in the caption. The emoji likely symolizes the singer’s misccariage she suffered while on tour about five years ago. A baby born after a miscarriage is often called a “rainbow baby.”

On Monday, Halsey took to Instagram to announce the birth. She posted a photo of her, Aydin, and the baby, and also a photo of her breastfeeding baby Ender.

“Gratitude. For the most ‘rare’ and euphoric birth. Powered by love. Ender Ridley Aydin 7/14/2021,” read the caption.

Many are speculating that the name Ender Ridley was inspired by science fiction, as both the first and middle names are very prominent in that genre. Although we are not exactly sure where the name comes from and what is means to Halsey, it is known that she loves science fiction.

Although Ender is traditionally a boy’s name, Halsey nor Aydin have confirmed the sex of the baby yet.

When it comes to gender, in February, the singer explained on Instagram how her  pregnancy gave her a different view on gender. Halsey revealed she thought being pregnant would embrace her feelings about being a strong woman, but instead gave her a different perception of gender all together.

“My sensitivity to my body has made me hyper aware of my humanness and that’s all,” she said.

The birth of baby Ender comes almost two weeks after Halsey announced her pop-punk album, “If I Can’t Have Love, I Want Power.”

According to the popstar, “This album is a concept album about the joys and horrors of pregnancy and childbirth.” Halsey’s fourth album will be released on Aug. 27.

We couldn’t be more excited for Halsey’s motherhood journey and can’t wait to hear what her new music has in store!

What are your thought’s on Halsey and Alev Aydin’s creative baby name? Drop a comment below and let us know!

Be sure to check out our latest article on Jennifer Lopez and Ben Affleck house hunting in LA.