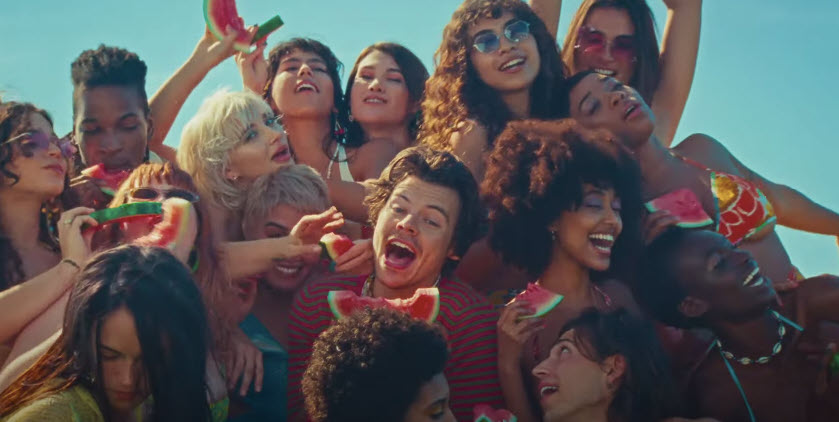 Posted at 07:00h in Celebrities, Music by Sierra Calvetti 0 Comments

Harry Styles premiered the official music video to his new single, “Watermelon Sugar” this week which was filled with none other than tons of watermelon eating. The music video was filmed in Malibu on the beach back in January where social distancing wasn’t even a concept yet and directed by Bradley and Pablo.

Styles tweeted the official video with the caption, “DO NOT TRY THIS AT HOME. Practice social distancing,” and we can see why.  The fourth single from his number one album “Fine Line,” Styles’s video is filled with a bunch of handsy women eating watermelon and berries alongside him in the sand with the opening scene captioned “this video is dedicated to touching.”

Music journalists have argued that “Watermelon Sugar” could be about oral sex with his NSFW lyrics while others say watermelon sugar is a term for illegal substances. However, after the music video was released, Styles seems to confirm that his song is about the former. With lyrics such as “It’s so wonderful and warm,” and “I just wanna taste it,” there’s no denying the curiosity that fans have been having about what the song is about.

Besides dropping the music video, Styles has been fairly silent on social media with his last tweet announcing the postponement of his tour to support “Fine Line.” With our continued stay at home orders in some states, “Watermelon Sugar” is a nice distraction to have for fans and viewers alike to enjoy where we could imagine ourselves on the sunny beach eating watermelon.