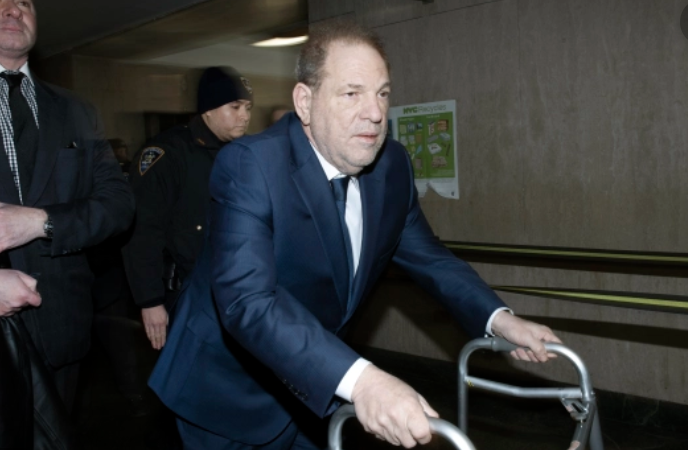 This past Monday, disgraced movie producer Harvey Weinstein, with the help of his walker due to his recent back surgery, slowly made his way into the first day of trial in lower Manhattan. An absolute circus of media, #MeToo movement activist and other onlookers crowded outside the New York criminal court to get a glimpse of the accused making his way for the beginning of what may lead to his imprisonment. The courtroom, however, was quite the opposite of the chaos going on outside. Hushed and without much drama, the first day of Weinstein’s trial was mostly procedural. Weinstein, of course, has plead not guilty to all charges of non-consensual sex charges he is facing and is innocent until proven guilty, despite the dozens of women who came out of the woodwork to accuse Harvey of various sexual assault charges. Monday marked the day Weinstein was officially charged with felony charges of forcible rape, forcible oral copulation, sexual penetration by use of force, and sexual battery by restraint from which his trials will now be set to decide in the coming weeks. Los Angeles County District Attorney Jackie Lacey is fairly confident that Harvey Weinstein will pay for his crimes in a statement, “We believe the evidence will show that the defendant used his power and influence to gain access to his victims and then commit violent crimes against them…”, as reported by the Los Angeles Times.

In the wake of Harvey Weinstein’s trial, which spearheaded the #MeToo movement, two of his more famous accuser, Rose McGowan and Rosanna Arquette, lead an activist rally to mark the beginning of the trial just outside the Manhattan courts Rose McGowan was quoted saying, “ Today, Lady Justice is staring down a super-predator…” and it is fitting that the two Assistant District Attorneys Joan Illuzzi-Orbon and Meghan Hast are the two women team prosecuting Weinstein. On the other side, a female, attorney Donna Rotunno, also leads the defense. At the end of the day, not much happened this week besides the official accusations and the defense requested for a sequestered jury for the trial due to the high profile and media sway of the jury. Of the some 80 women to come forward, only two cases are actually being tried against Weinstein. According to the criminal complaint, “Weinstein and a woman attended a Hollywood film festival on February 17, 2013, and later that night, he knocked on her hotel room door and was allowed entry into her room. Once inside, they talked briefly before he allegedly attacked the woman, forced her to perform oral sex on him, digitally penetrated her vagina, and raped her, the complaint says. On February 19, Weinstein met with a woman and her acquaintance for a business meeting at a hotel eatery in West Los Angeles, the complaint says. Weinstein persuaded the two to accompany him to his hotel suite, and one woman unwittingly followed him into the bathroom. He allegedly took off his clothes and prevented her from leaving. After he [allegedly] held her in place by her breast as he masturbated…” according to CNN Weinstein faces a charge of felony sexual battery by restraint for that incident. In any case, justice will be rightfully served for the once prestigious and well respected movie mogul who faces a maximum of life in prison.