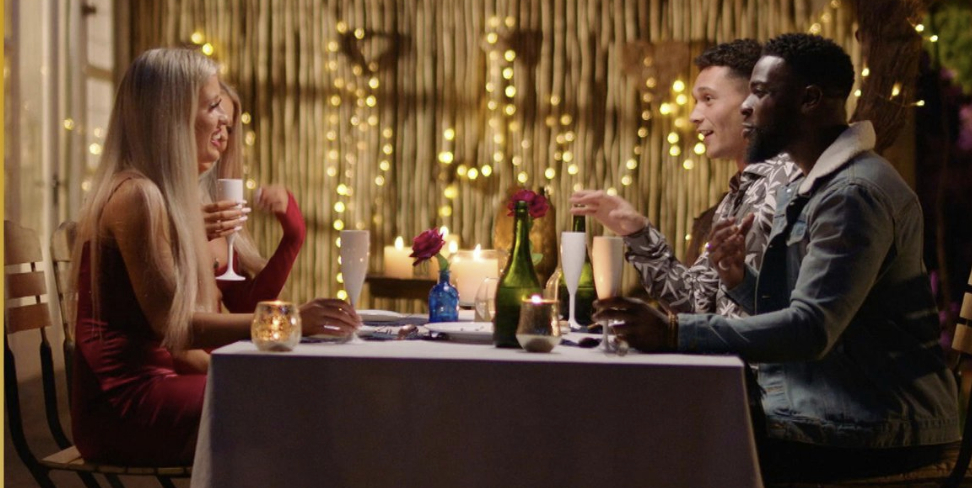 If you live in the United States, then you’ve probably seen endless hype posts about Love Island’s winter revival. Now, Hulu has finally released a couple episodes allowing us Americans to catch up with our favorite British reality drama – winter version. Don’t let the chilly months get you down, though, because this season is already packing the heat. With a new villa mansion located in South Africa (where it is indeed summer at the moment) and a new host, season six sets the stage for more posh, refurbished and drama packed episodes than ever before.

Laura Whitmore (aka British Reese Witherspoon) has replaced fan-favorite host Caroline Flack, who was charged for assault against her then-boyfriend (the drama doesn’t end with what we see on the screen, it seems). Whitmore makes her sexy debut with none other than a slow-mo scene of her hopping out of a jeep and striding into the villa to bring on the fun.

We are introduced to 12 new islanders. Sophie, Paige, Siannise, Shaugnha and Leanne came strutting into the scene (slow-mo, of course) with complete hair and makeup done and extravagant bikinis. They all chose to step forward (or not) for the boys Mike, Nas, Ollie, Connor, and Callum. Like many other seasons, no females stepped forward for the first male contestant, Nas, to enter the villa and approach his potential mates. When asked by Whitmore what concerns they had over Nas, a couple of the girls savagely referred to his height not meeting their expectations.

To further the awkwardness, Siannise, who Nas ended up choosing, stepped out for Callum, the next boy to enter the island.

At the end of the episode, in good ol’ Love Island fashion, two twins entered the villa: Jess and Eve. Some of the boys claimed that they could tell the identical girls apart, but when guessing whether one was named Jess, Callum was actually talking to Eve (better luck next episode, bud).

In the second episode, the twins will get to pair up with boys already in a couple. Bring on the double trouble!

After a day’s wait, episode two pulls us in by our immense curiosity over drama-filled previews: Who will the twins chose? Whose mans will they steal?

The other girls on the island made their nervousness known. Shaugna commented on how she couldn’t stop looking at the twins’ boobs. Jealousy really speeds up the whole attachment aspect of the couples, and Love Island producers know how to get that jealousy circulating.

The islanders bond over a game of tea spilling. They dunked their bodies in a tea-filled (or questionable substance – who knows what it really was) huge teacup-shaped tank, read a slip of paper revealing a ‘sexy, steamy secret’ of a contestant of the other-sex, then had to smooch whoever they believed it to belong to.

From the spicy game, we learned that Paige used to date famous singer-songwriter Lewis Capaldi, Leanna wasn’t impressed by her first kiss with Mike, Siannise just doesn’t quite feel that spark with Nas, Tyga slid into Eve’s DMs, Ollie cheated on a previous partner 8 to 9 times, and Connor has slept with over 100 people—but doesn’t want to be judged for that fact. Maybe we aren’t necessarily judging, but we are definitely wondering.

After the game, Leanna pulls Mike aside. Mike had just kissed Jess twice, and Leanna claimed she only saw it as part of the game. Mike told Leanna that she ought to let her walls down a little more, but she responded it was only day two of knowing each other. That stuff takes time! Mike did reassure her that he would love to get to know her more, and even with the twins shaking things up, he wanted to stay in a couple for now. Mike complemented Leanna’s soft lips, telling her they would share a much better kiss “later on.” We’ll see!

The twins pull aside Mike, Callum, and Connor during various scenes. No one can really tell “where their heads are at”—whether it be the twins, any of the other islanders, or even themselves.

Finally, the night of the choosing comes. The girls glo up as much as possible; the boys do what they can to look dapper.

The twins have a chat with Mike, then Callum, then one another. They reveal that they both prefer Callum, upset that neither had a different answer.

Before the big choosing, Shaugna pulls aside Callum to give him a “parting kiss” that turns into a full makeout. The canoodling did not give off huge “goodbye” vibes.

Finally, the twins got a text. They stood before the rest of the couples for what seemed like twenty minutes of the whole episode, before Jess finally chose Mike and Eve chose Callum.

Shaugna and Leanna looked shook, but then Shaugna got a text explaining that there would be another recoupling later that week.

Pressure is on, and it’s episode two. We’re in for a wild ride with this winter Love Island.

After the first two spicy episodes of this season, expectations are high. However, like any reality show, the drama must be dragged out. Love Island producers serve us two 45-minute episodes with no recoupling, getting us excited for basically nothing.

To make up for this atrocity, we instead get to watch Mike and Callum’s reactions to being chosen by the twin blonde bombshells.

Turns out, Mike’s not really feeling it for Jess. Instead, he wakes up feeling butterflies for Leanne. He tells Jess first about his feelings, and she takes it with disappointment. He opens up to Leanne about these feelings, and they chose to sleep in the same bed again that night.

We learn that Siannise is still not feeling anything for Nas, who explains he’s receiving mixed signals from his partner. Outraged by this gossip, Siannise goes off on her date at the bar table, explaining that he can come to her if he has any questions about where her head’s at. Talk about an awkward, slow-to-come-around coupling! Nas honestly takes it like a champ, telling her there are plenty of girls in this world, and he won’t be too bothered if only one of them doesn’t show interest in him.

Now back to the dramatics, please.

Ollie has a deep talk with the boys to express his emotions. He tells them “going through the motions” with Paige has made him realize he still has feelings for his ex (the one he cheated on 8-9 times, we wonder?). Ollie makes the executive decision that he must leave the island. We say goodbye to the first islander, but to be honest, we don’t really care. He didn’t provide much entertainment, and Paige needs her game to step up after dating Lewis Capaldi.

Callum gives an adorable quote, stating that love to him means “when their happiness is your happiness.”

Finally, towards the end of episode, a girl “GETS A TEXT.”

Two new boys are to enter the island! All of our female islanders get excited, making the boys quite jealous. Especially Connor for Sophie. He pulls her aside to have a chat to discuss how her excited reaction to new boys coming was hurtful.

She shakes it off, saying that it was more of an excitement for the other girls not currently in a couple.

We shall see, however, what occurs when the new guys actually make an appearance.

New boys, Connagh and Finnley, enter the island hot and ready. Finnley choses to first go on a date with Siannise, and Connagh choses Sophie (to the original Connor’s dismay, of course).

The dates go on fine, but Siannise just seems happy to escape Nas for once, and Sophie just likes the eye candy.

When the latter two girls head off for their date, Callum makes sure to tell Shaughna “Have a good date, but don’t.” Is our biggest player jealous? Shaughna loves it!

Shaughna and Connagh bond over the “GH” spelling of their names and Shaughna’s love for watching Piers Morgan argue on television.

When all the ladies return, they go straight to a social circle to have some girl chat. Besides saying the word “like” in between every, like, word they, like, say, they explain how attractive this new Connagh character is—deeming him as the “Anthony Joshua look alike.”

Sophie admits she does feel more of a connection with her OG Connor, and he is more than stoked to hear these words leave from her mouth. Shaughna, on the other hand, is pumped to have a guy to make Callum envious. He explains to get Shaughna back he will just start a chat, maybe make her some breakfast and tea. Better get on that, then! Eve and Shaughna talk as they get ready for the night that their original islander boy ought to start being more straight-up.

To welcome the new boys, the islanders play a game of girls versus boys beer-pong dares. They must land a ping pong ball in a cup for their opponent and do the dare marked on the bottom of said cup.

After the game, Connor and Connagh (same name when said with a British accent) have a discussion about Sophie. Not much is accomplished, since Sophie is still feeling Connor more than anyone.

Episode 5 leaves us with another hanger, without another recoupling taking place. Who will the new boys choose? We must know now!

Tune in to our next recap for more updates.