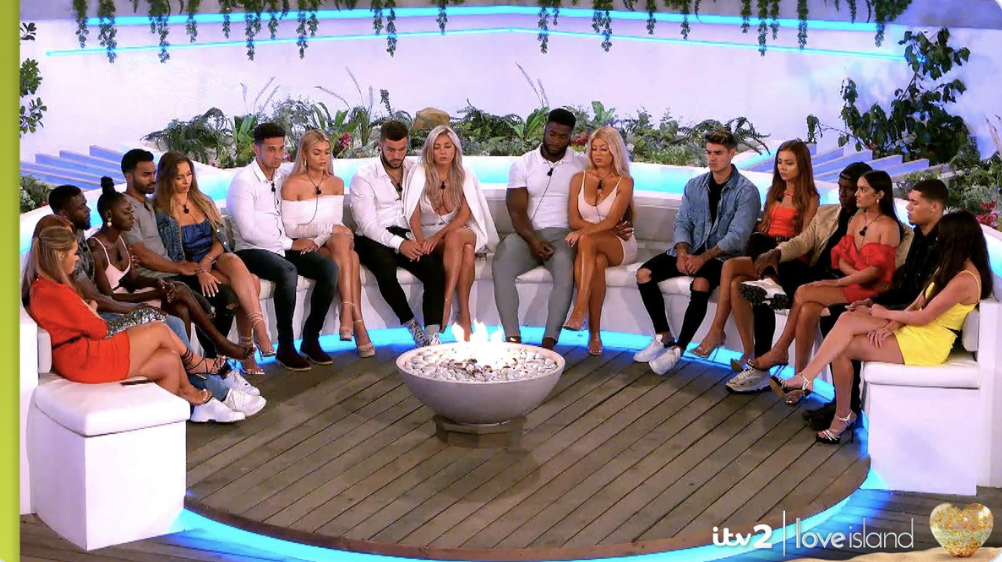 Buckle up, Love Island UK Fans – we have A LOT to catch up on. If you think there’s been any lack of drama in the season thus far, then hold your horses! That all changes in this week’s recap.

We ended our last recap with the arrival of new girl Rebecca. We learn she is a catty snake, saying one thing to the girls, but actually doing otherwise with the boys. She excuses this behavior by repeating “I came in here to do what I got to do,” as if that makes her look any smarter of a person.

She originally chose Callum and Connor, spicing things up for Shaughna and Sophie. Sophie kissed Connor, while still in a couple with Connagh—after telling Connor she was still leaning towards him. Connagh heard from other islanders that his chosen woman was snogging other guys and approached her for a chat. Sophie lied to Connagh, and he immediately called her out.

Now that Sophie and Connagh are over, Connagh goes to makeout with Rebecca, even though Siannise has made it clear several times she would be willing to go for Connagh.

Finally, two new boys are previewed to enter the villa, and it was up to the British population to vote for which girls they want to see on a date with Luke T. and Luke M. (a Justin Bieber look alike… the resemblance is almost a little too spot on).

They all seem to vibe quite well. Or, in British terms, the banter is definitely there.

Paige gets mad at Finn for something, Connor gets extremely jealous over Sophie, and Leanne claims to have had a bad first impression of Luke T. They play some games.

Then, the real fun starts—with a dramatic recoupling including new islanders Rebecca and the Lukes.

Leanne chooses Mike, Shaughna chooses Callum, and Sophie chooses Connor. Siannise makes clear she wants to choose Luke T., but Rebecca swooped him before she had the chance. Another snake moment! Jess ends up swooping Luke M., and Siannise makes the decision to choose Nas as a friendship couple.

That leaves Connagh, who had to pack up in 20 minutes to exit the villa. He should’ve chosen Siannise if he wanted to avoid this situation!

In the next episode, Siannise confronts Rebecca over being a snake. Rebecca fake apologizes, once more explaining she has come to the island for one purpose and one purpose only.

Shaughna and Callum finally go on a date, in which they prance around a beach and jump into absolutely freezing cold ocean water (No thanks!).

The other islanders continue getting to know one another. Siannise and Luke T. seem to certainly ‘crack on,’ and Rebecca is having absolutely none of it.

Then, some terrible news is revealed. The UK has voted which couple they dislike most. To everyone’s shock, it was Connor and Sophie. The rest of the islanders have to vote which one of them has to pack their things and leave the island.

They ultimately chose Sophie, but everyone is heartbroken over the loss of Connor. The amount of times he was called a ‘brother’ by the other islanders cannot be emphasized enough here.

We really thought he had a chance to make it to the end, but after all the jealous moments, it seems the UK wanted him out.

Then, if things were not already heating up enough, the producers send in TWO MORE islanders: Wallace and Demi.

Other chosen islanders have to cook food for the two upon arrival, and the additions seem to work great with our current crowd.

Wallace is mostly interested in Siannise, and Demi fancies Nas.

Yay, Nas! We have all been waiting for this moment.

In another dramatic dumping, Leanne decides to end things with Mike (who has definitely put in all the effort) after just not ‘feeling it.’ During recoupling, Mike then dumps Leanne from the island, choosing Sophie instead. Finn chose Paige, Callum chose Shaughna, Wallace chose Rebecca, and Nas chose Demi. Luke T. chose Jess and Luke M. chose Siannise.

WOWZERS to that one! Leanne played herself.

We then discover Mike (after being friendzoned by Sophie) might actually be feeling Jess, who certainly enjoys his company, but is currently coupled with Luke Bieber. Bieber wannabe is having none of this.

The islanders play a guess that sex position game, Nas and Demi share their first kiss (we are living for this couple), and they play another game called Oktobersesh. Lots going on with all these island additions… and subtractions.

In the final episode of this recap, the islanders must decide which couple is the least compatible. The chosen couple has a chance of being dumped from the island.

Find out what goes down in next week’s recap!