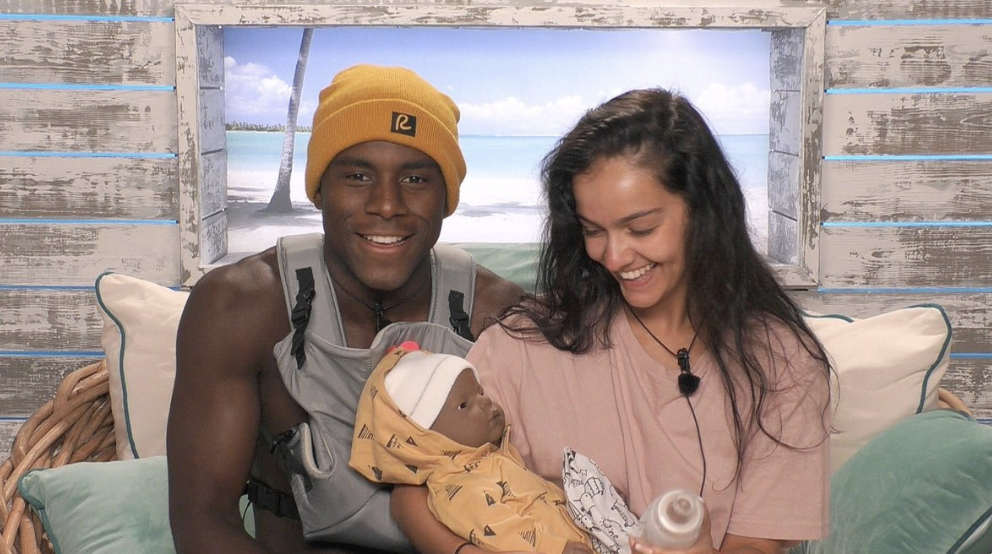 It’s week five, and Casa Amor has rocked the boat for our Islanders. First off, Callum kisses Molly, totally ditching his relationship with Shaughna behind. Luke M. claims to be head over heels for Natalia, but chickens out on kissing her after she explains she likes taking things slow. Mike falls hard and fast with Priscilla, in what is now his third major ‘relationship’ during his time on Love Island.

Back at the villa, Laura Whitmore announces the return of the boys from Casa Amor. Mike comes out first with Priscilla, and thank God our girl Jess chose to couple up with Ched—or else she would be single. Luke M. then comes out with Natalia, and everyone seems to be happy he found someone. Siannise chooses to stick with Luke T., and happy tears are shed when he walks down to the fire pit without a girl on his arm. Then, Demi decides to stick with Nas, but Nas walks out with Eva. Everyone is shook. Demi is “gutted.” Paige decides to stay loyal to Finn, and to everyone’s enjoyment, he decided to come back alone. Shaughna, after a few days of extreme doubt, still chooses to stick with Callum. He walks out with Molly, and everyone gasps.

Honestly, Molly looked stunning in her purple sparkly two-piece, so we are going to leave all anger with Callum on this one.

“Should have never trusted a scaffolder in the first place,” said Shaughna. Callum is a scaffolder, for those of you that haven’t caught on.

Our beloved, and now very single Shaughna proceeds to cry with Paige, have a very anti-productive chat with Callum, and remain mopey and sad around the villa.

Nas and Demi have a heartbreaking talk, but they both seem to be more moved on. At least Nas certainly is as he proceeds to get Eva’s red lipstick all over his face.

Finn and Paige are ecstatic to be back together as are Siannise and Luke T.

In the next episode, Shaughna and Molly go on a “date” to hash things out. All we learn from this occurrence is that Shaughna is sad and Molly is happy, which we already knew.
Then, we learn that Natalia is not sexually attracted to Luke M. Probably should’ve thought about that before returning to the villa with him, silly!

Shaughna and Callum speak once again, and it ends with Shaughna storming off, crying. They talk yet another time, and it ends with Callum saying “I just want you to be happy.” Why’d you go off with Molly, then?

Siannise and Luke T. spend the night in the hideaway, and she does a special strip tease for him in her special lingerie. She then proceeds to do a lap dance for him in the dark. Spicy! Mike and Priscilla continue getting to know each other by playing two truths and a lie. She is 20-years-old, and Mike has had sex on the beach. Cool information!

Then, Sean Paul enters the villa for a special Spotify VIP party! Shake that thing, Islanders!

After some grinding and making out among the various couples, Finn takes Paige to the fire pit to ask her to be his girlfriend. She gives him a kiss, which of course means yes! All the Islanders applaud and celebrate their happiness for the first official relationship of the season.

We discover the public must vote for their favorite couple. Whoever receives the least amount of votes will be dumped from the island in the next episode.

Luke M. and Demi chat and share some cute flirtation. Seeing this, Natalia explains to Luke T. and Siannise that she wasn’t done with Luke M. Too late, honey!

Luke T. cannot remember this conversation, however, when trying to explain to his bud Luke M. They share some laughs. Oh, bromance.

Finn and Paige mess around in bed, and the boys come up with code words to refer to their activities. Some include bread (sex), avocado (oral) and tomato (hand-related activities).

Ched and Jess become a lot closer, and Jess explains she loves how Ched is always there to help her out and understand her humor.

Mike helps Luke M. with his pick-up lines during their gym time.

The Islanders then play a very boring game of Girl Racers, in which the boys must lead the blindfolded females through a race course. Like I said, it’s boring.

Luke M. uses the flirting he learned earlier to tell Demi she has piercing eyes. Then, they kiss. It’s very cute. Back off, Natalia! Go back to Casa Amor!

Then, the Islanders gather around the fire pit to announce which three couples had the fewest votes from the public: Jess and Ched, Rebecca and Jordan, Eva and Nas.

Rebecca and Jordan are then booted from the villa. The girls explain that they’ll miss Rebecca, although she was a nightmare.

Then, Eva and Nas are dumped from the island.

Everyone is SHOOK, in capital letters. In the next episode, Nas says his goodbyes, focusing on Demi, who quickly moves on to hugging Luke M. before bed. Luke M. then makes her breakfast the next morning.

Finally, our girl Shaughna has been picked by newcomer Jamie to go on a date! Everyone is so excited for her. They go on a wine-tasting date and seem to click well. Jamie explains how he is going to tell Callum off, stating that Shaughna is too smart for that scaffolder anyways.

He then chooses Demi for the second half of the date. He tells her he likes how she talks a lot. Luke M. gets nervous about his new crush going off with another boy.

Jamie, upon entering the villa, immediately gets along with the other guys, while joking around with them that he could steal their women, as he does not yet have a favorite girl.

They then play a balloon popping game, in which they answer sex-related questions regarding the British population. We watch Mike hump the balloon pump (pretty disturbing) and discover that the average female orgasm lasts 20 seconds (fascinating).

Demi and Luke M. have a chat about Jamie and being open, but close the chat with a makeout sesh.

Jamie eventually has his chat with Callum, telling him off for not going about the Shaughna situation the right way.

Mike and Priscilla get a night in the hideaway, and he licks whipped cream off her leg.

At 5am, Jeess gets a text to go on a date with Ched. They hold hands and visit a beach with penguins.

Most importantly, though Shaughna realizes she likes Luke M. Paige and Finn are happy for her.

Then, the islanders play a wild game called “News Flash,” in which they must fill-in-the-blanks of headlines having to do with them. From this game, we learn that Mike has been branded a snake for his reaction once Callum dumped Shaughna. Callum is predicted to cheat on Molly. People want to make Luke M. and Shaughna a thing. Luke T. exposed to the boys that Siannise got naked in the hideaway. Finn’s head was turned in Casa Amor, etc.

This game causes a lot of tension and fighting among the islanders, but eventually things are hashed out between each couple. Paige yells at boyfriend Finn. Siannise scolds Luke T. Molly confronts Callum. Priscilla gets weird with Mike. Nice one, producers!

Demi becomes sad after Shaughna approaches her explaining her newly discovered interest. She cries to Siannise, who encourages her to continue going after Luke.

Luke M. and Shaughna chat and get to know each other. Luke was born on May 4th, so Shaughna asks if his mother intentionally named him after Luke Skywalker (May the 4th be with you). Unfortunately, the answer was no.

Then, the islanders get a text that there will be a recoupling tonight and one girl will be chosen to leave. Shaughna explains to Jamie she is no longer interested in him. Natalia tells Jamie she wants to be in a couple with him. Demi gets nervous over what will happen.

Tune in next week to find out!