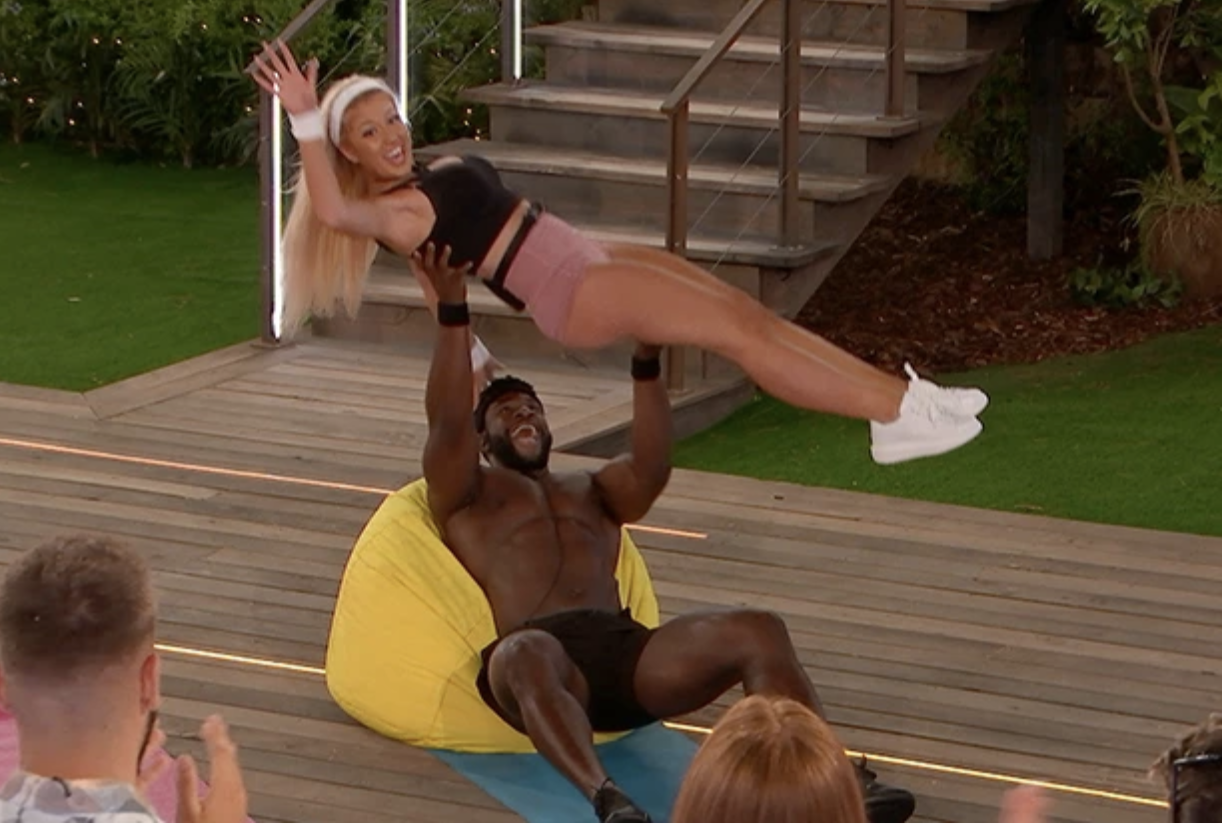 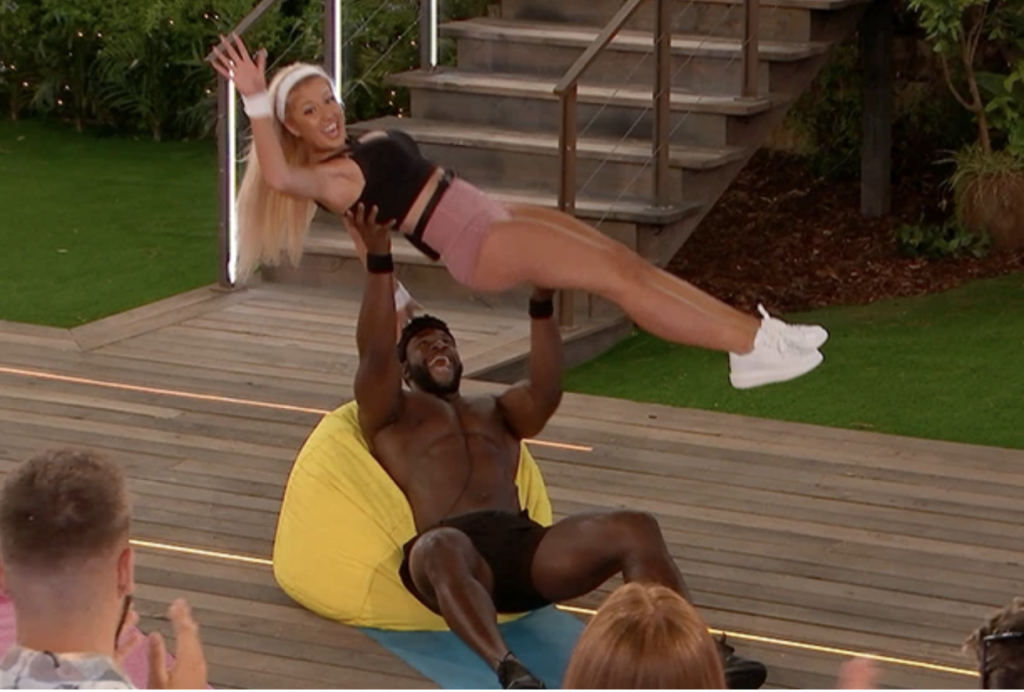 This next week begins with a recoupling, in which the boys have all the power. New boy Jamie starts off by choosing Casa Amor’s Natalia, who is quite clearly in the villa to just be in the villa. No intentions of finding love here!

Everyone else chooses their expected gals, but then it’s down to Luke M. to choose between Shaughna and Demi.

After a long dragging out of intense music and back-and-forth shots, Luke finally chooses Demi, meaning Shaughna has been dumped from the island. In one of the hardest goodbyes of the season, Paige and Shaughna share a final hug before one of our favorite islanders departs for good.

That night, all the couples make out in bed. Things are getting spicier and spicier with the finale coming up.

The next day, Demi and Luke M. go on a date, in which they ride a double bike. Demi screams the entire time. It’s pretty annoying.

Ched joins the rest of the boys in the breakfast club, where they use code words to discuss their sexual experiences in the villa.

Then, the islanders participate in a Valentine’s Day competition, in which they must carry food and wine through an obstacle course. The best part of this game includes when Jess bangs her head completing one of the obstacles.

Finally, by setting up a very adorable fairy tale scavenger hunt, Luke T. asks Siannise to be his girlfriend. She responds 100%.

In the next episode, Jamie decides to ask Natalia for a kiss. It is very awkward, and she proceeds to gossip about it with all the girls. This couple is going nowhere.

The next competition includes the “Couple Goals” challenge. The islanders must vote for which couple is the most (*fill in the blank*). Paige and Finn win the laziest couple. Jamie and Natalia win the most fake couple. Siannise and Luke T. win the most vain couple, while Mike and Priscilla win the most attention seeking.

Mike then pats Priscilla on the head, and Priscilla becomes furious. How dare he! They go and have a chat about this, and everything seems to be okay after. Oh, the drama.

The only couples not voted for included Luke T. and Siannise, as well as Finn and Paige. Every other couple has the chance to be dumped from the island, based on whatever the British public votes for.

Natalia is pissed that her friends from Casa Amor would vote for her as least compatible. What did you expect, Sweetie?

In the next episode, the islanders wake up to some baby cries. It’s baby doll day in the villa! They come up with all sorts of crazy names for the dolls, such as Jess and Ched’s option of “Winter Ocean Oozle.” Overall, the dads do the best job of looking after the babies. The girls realize maybe they would want to have children with these men. At one point, Jamie and Natalia’s stroller flies into the pool, swooped up by a strong gust of wind. No worries, though, Natalia had actually been holding her doll (for once).

More than half the couples pass the baby doll challenge, so they are rewarded with a dance party. After a very strange, somewhat slow-motion dance party, the islanders get a text to head to the fire pit.

At the end of the episode, we discover the public voted Natalia and Jamie the least compatible, and they are dumped from the island (surprise, surprise).

However, the rest of the islanders must then choose their favorite between Mike and Priscilla and Molly and Callum, who were voted the next least compatible couples.

After each couple votes, Molly and Callum are dumped from the island. Another sad goodbye in the books.

A Safari Date For The Win

The next morning, Mike gets a 4am text that he and Priscilla are going on a date. They go on a super cool safari. They see elephants and lions! Then, on top of a huge rock overlooking the reserve, Mike asks Priscilla to be his girlfriend. She says yes.

Finn and Paige then go on a rowboat date, and they admit they are falling for each other. Finn even mentions moving in with Paige. Big moves for back home!

Jess and Ched also get to go on a date, where they roast some kabobs on a grill. Ched and Jess then become exclusive. Everyone is really cozying up.

The Date That Finally Happened

In the next episode, Demi and Luke M. finally get their date. There’s a lot less screaming than their previous one. In fact, there’s a lot more giggling, blushing and making things official. We may never know if these questions are genuine, or for the 50,000 pounds at the end of this journey.

Then, the boys are texted that they’re being sent on a special mission. They must make the girls do certain tasks without their knowledge that they are participating in a challenge.

Mike gets all the girls to kiss his cheek for a series of selfies. Luke T. tricks Jess into thinking that she has something on her face. Luke M. asks Paige to retrieve five items for him. She drops some cookies during this experience. She also mistakenly puts salt instead of sugar in Luke’s tea. We think it’s a mistake, at least.

Finn actually gets Demi to massage her feet.

Luke M. tries to convince Demi to go into the pool. Ched then has Demi retrieve Siannise’s sunglasses, which he dropped in the pool. Finally, the boys get the rest of the girls into the pool. Paige is the last one to go in.

A text then informs the girls of the mission, and they are told they will all be gifted cocktails!

The men back at the villa discuss being “feminist,” and Finn can barely even say the word right.

In a more serious conversation, Luke tells Siannise he loves her.

When they return, the rest of the islanders go wild for the lovey dovey couple! Siannise has tears running down her face.

Then, they have a talent show.

Mike plays the drums for the other islanders, and they are bopping. Priscilla then does a special dance for the islanders. They get up on their feet to cheer her on.

Luke M. brings out a guitar, looking just like Justin Bieber. He’s actually not too bad.

Jess and Ched perform a dance piece together, which actually plays out more like a workout. Still hype.

Finn comes out in shower attire (a towel and shower cap) to sing “Ain’t No Sunshine.”

Demi comes out in a (sexy) doctor outfit. She proceeds to have a history lesson.

Luke T. and Siannise perform another couple dance routine in camouflage outfits. As Demi said, their chemistry is not only in the bedroom, it’s on the dance floor.

Paige then sings “Show Me Love,” and she actually has an amazing voice. Everyone is taken aback!

In the end, Jess and Ched win the talent show. As a reward, they get to spend the night in the hideaway!

With that, the islanders say goodnight (with a few kisses here and there).

Tune in next week for the Love Island finale!