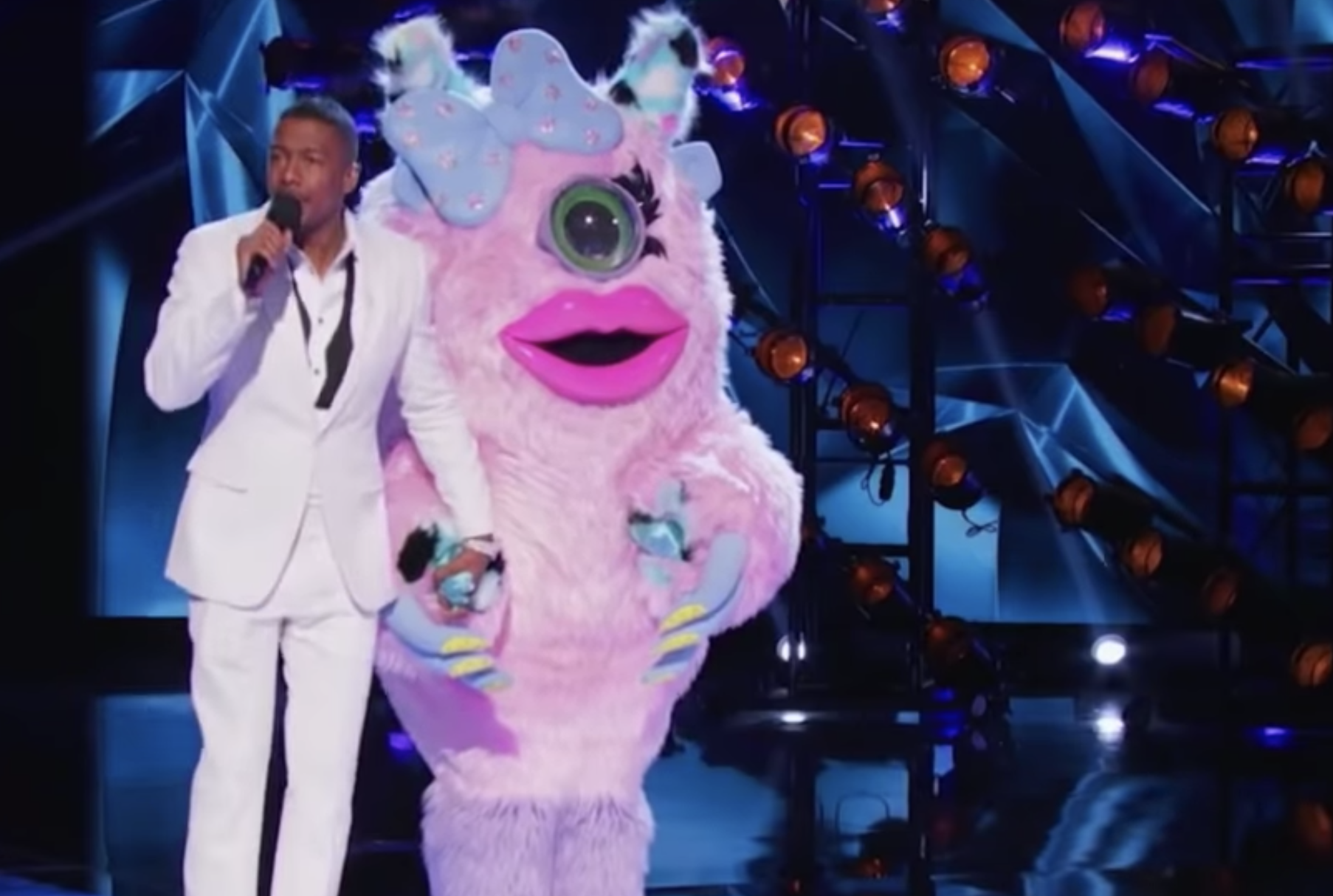 More clues about Turtle came from his 9th grade biology teacher, that he was always singing, the most driven student, and there was a close up on a map with Seoul, South Korea. Turtle sang “There’s Nothing Holding Me Back” by Sam Mendes and showed off some dance moves. Robin Thicke guessed that Turtle may be James Blunt. Turtle told Nicole Scherzinger, “I will never forget the morning we spent together, it was turtle-y awesome.” The panel erupted with insinuation, but Jenny McCarthy Wahlberg helped her out by pointing out that he could have been on a morning show with Scherzinger. McCarthy thinks Turtle could be Nick Lachay, because there was a bat in his clue package and Lachay owns a minor league baseball team. Nick Cannon added that Nick Lachay was involved in morning television at one point, that could be the Scherzinger connection. Guest Panelist Leah Remini guessed Jayden Smith because Turtle said he wanted to “break free” out on his own. Scherzinger said Turtle’s voice reminds her of country pop star Hunter Hayes, and that he has toured Korea, so that could explain the map in clues.

In Miss Monster’s clues, there were white socks, pizza, and camouflage. She talked about her hair and how she hasn’t always been seen in the press as she really is, that she is all about spreading love. Miss Monster sang Lesley Gore’s “You Don’t Own Me.” Afterward, Miss Monster had a valentine for Robin Thicke saying, “I only have an eye for you, we even have a rendezvous in Sin City.” Remini guessed that Miss Monster is Mary Wilson. McCarthy went off the white socks and a teddy bear in the clues to make a Chicago connection. Even though Queen Latifah is from New Jersey, McCarthy guessed that Miss Monster could be her because she was Oscar nominated for her role in the musical Chicago. Scherzinger went the Gloria Gaynor route because of Miss Monster’s voice. Thicke got on board with that because he performed with Gaynor in Las Vegas once.

Kangaroo’s younger brother spoke about her, saying she was a drama queen as a teen, but that he greatly admires her. When tragedy struck their family, she held us together. The clues featured were a model plane and an angel. Kangaroo sang “Diamonds” by Rihanna and her valentine was to Remini, “Your courage has inspired me,” and referenced a table. Remini was on The Talk, so the panel mused that Kangaroo may have been a guest on The Talk. Dr. Ken said he has worked with a model who has a lovely brother, so Kangaroo must be Victoria’s Secret model Rosie Huntington Whiteley. Scherzinger clung to “drama queen as a teen” and guessed Lindsay Lohan. McCarthy pointed out that Jordan Sparks has a little roo and has a little brother.

A college buddy of White Tiger said, “he is fun and they once met hot ladies at the club.” White Tiger edged out the competition by making up a ridiculous dance routine like the movie Magic Mike, the ladies loved it. He also referenced, “Smell what I’m cooking?” adding, “When he commits, he doesn’t stop until he wins.” White Tiger sang Queen’s “We Will Rock You.” His valentine was the McCarthy, but he ended with, “I know your husband will appreciate this card even more.” McCarthy zeroed in on the quarters in the clue package and stuck with football player The Gronk. Scherzinger pointed out, “The more sure we are, the less likely we’re right.” Dr. Ken focused on pats of butter in the clue package and guessed that the massive White Tiger may be “I Can’t Believe It’s Not Butter” pitchman Fabio. Scherzinger diagreed, guessing that the playful, tall, dancing White Tiger is Joe Manganiello.

The audience voted to eliminate Miss Monster. Scherzinger and Thicke agreed with each other, that Miss Monster is Chaka Khan. McCarthy stuck with her Queen Latifah guess and Remini stuck with her Mary Wilson guess. Dr. Ken came out of the left field with Reba McIntyre, because the camo referenced Reba’s performance for the troops. Miss Monster did perform several country standards as her early songs, including Miss Monster’s second song “Fancy.” However, Miss Monster was revealed to be Chaka Khan, so Scherzinger and Thicke were correct. Khan is from Chicago and she and Thicke were on the same show 10 years ago in Las Vegas.

Traits: Powerful, large, pushing himself to excellence, challenging himself, dancing and movement, skiing cow poster, 4 in 7, “go to the mat for a friend”

Out there choice: Dwayne “The Rock” Johnson, Joe Manganiello

Out there choice: Adam Lambert and Zac Efron and Jayden Smith

Out there choice:  Iggy Azalea and Lindsay Lohan, neither has a little roo that we know of