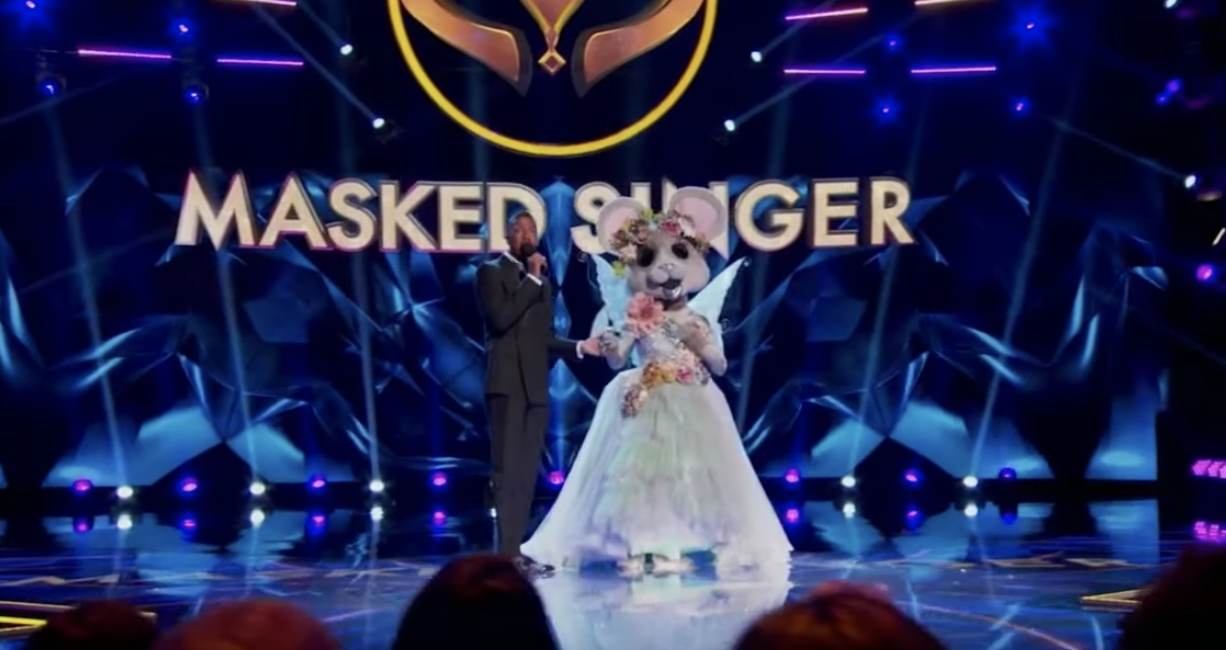 So far on this season of Masked Singer, the judges are 1 in 4 on guessing masked singers. We’ll see if they can sharpen their skills. This week’s guest panelist for the Group B playoffs was comedian Gabriel Iglesias, nicknamed “Fluffy.”

In Banana’s clue package there were the numbers 213, cowboy boots, a comb over, and some talk about “cathartic,” “get ‘er done,” and “rebrand.” Banana’s brand is energy, he came out swinging with his rendition of Billy Ray Cyrus song “Achy Breaky Heart.” He was able to go from the Electric Slide into a knee drop. When asked what subject in school was his best, he said, “Art got me through the toughest times in my life.” Jenny McCarthy disagreed that “get ‘er done” must mean that Banana is Larry the Cable Guy, because Banana is lean (even though bananas are high in carbs). Nicole Scherzinger doubled down on last week’s guess, that Banana must be Ed Helms. Iglesias originally thought Banana might be Erik Estrada, because there was a poster of a “Banana CHiPs” show poster in the clue package, but instead he thinks he is Billy Bob Thornton.

Mouse’s clue package included wine and cheese, needlepoint, romance novels, prayer hands, and “ain’t no stopping me now.” Mouse sang Natalie Cole’s “This Will Be (An Everlasting Love).” In school, Mouse said math was her favorite subject because her daddy told her those numbers represent your money. McCarthy guessed that Mouse was greatness adjacent, like Tracee Ellis Ross. Dr. Ken guessed that Mouse is Tina Turner, because he saw brazil nuts in the clue package and knows that it is a fact that Tina Turner loves tree nuts.

In Frog’s clue package, the letters “C,” “I,” and “S” were prominent on his typewriter. There were also toy soldiers, a basketball and more references to “prince.” Frog sang 50 Cent’s “In Da Club,” to a samba style beat. Frog said that his favorite subject in school was P.E., “Because it keeps me in shape to bust dance moves that ladies love.” McCarthy was getting a triple threat vibe, similar to the previous Masked Singer winner, Wayne Brady. McCarthy connected the “prince” references to mean that Frog is Alfonso Ribiero, who was on the show Fresh Prince of Bel-Air. Iglesias agreed and Frog was game, he busted out the Carlton Dance. Dr. Ken went his own way with Kevin Hart, because there was a walk-of-fame star in the clue package and Hart just got a star. Scherzinger agreed, because Hart has a show on Youtube called What The Fit, about workouts. Robin Thicke said he thinks Frog is someone he knows, Omarion.

In Taco’s clue package, he admitted that he used to be more intense and buttoned up, then his wife came a long and softened him up into a “soft taco.” In the package there was a reference to space, constellations, and a hairpiece. Iglesias asked, “What I wanna know, is who’s gonna come between me and that taco?” The Taco sang Elvis Presley’s “Bossa Nova Baby” and afterward admitted in school he was a class clown. McCarthy was reminded that last week she thought Taco is a crooner like Harry Connick Jr., but now she thinks he is more of a comedian like Seth McFarlan. Iglesias went deep with the clues and Cheers trivia and came up with Ted Danson for Taco’s identity. Dr. Ken latched onto the wife chilling him out and guessed that Taco is Alec Baldwin. So the Taco guesses are all over the map right now.

Miss Kitty revealed in her clue package that she loves sewing, she may sew a “modern dress for a family ball,” and she completed a red riding hood during the piece. She performed Brett Young’s “Mercy” and said in school she loved English class because she is a bookworm. She even wrote her own little sci-fi books and sold them to friends. McCarthy guessed that Kitty is Millie Bobby Brown, when Iglesias went with someone who has played Little Red Riding Hood recently, Amanda Seyfried. Dr. Ken went with “modern” and “family” and guessed Sarah Hyland, because she also dated a star of the Bachelor and her clues have red roses all over.

The audience voted off the Mouse, and most of the panel agreed that Mouse is Dionne Warwick, except Dr. Ken who stuck with his Tina Turner guess. The Mouse was revealed to be Dion Warwick, R&B hall of famer and 5-time Grammy winner. Warwick said her clues pertained to her being a Raider fan, that Al Davis made her an honorary coach on her birthday once.

Likely choice: Alfonso Ribiero, because Rib(it)iero, I just saw that. Plus the Carlton Dance.

Out there choice: Ray J

Out there choice: Nicole Richie

Traits: Goofy, on television for decades, trolley, video tapes, wife softened him up

Likely choice: this taco has been dropped on the ground, guesses are SCATTERED

Out there choice: Ted Danson

Out there choice:  Jeff Foxworthy