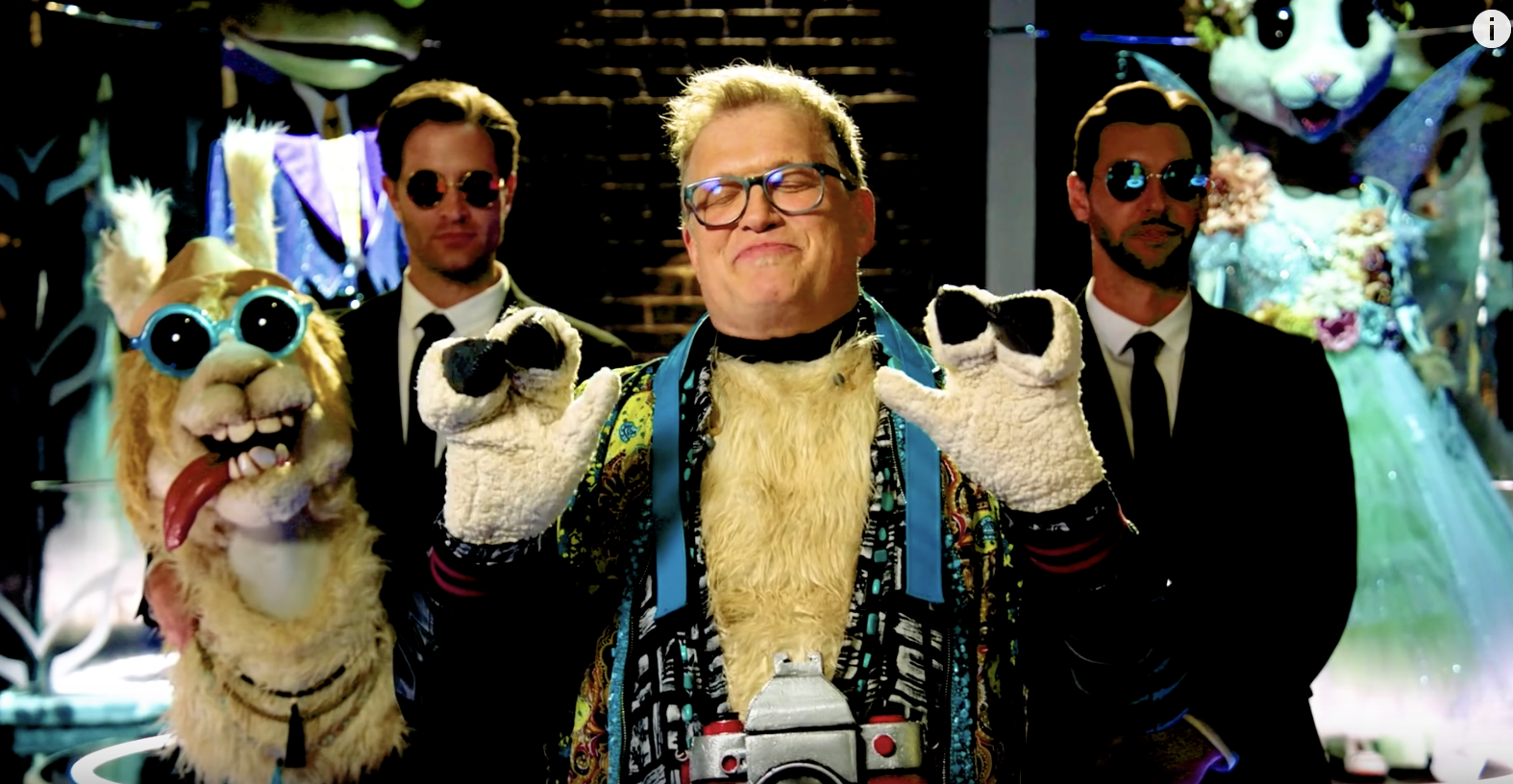 Llama got the crowd chanting with his rendition of Tom Jones’ “It’s Not Unusual.” The Guest Panelist for this week was Jason Biggs, who told Llama that he liked his “Llama Swagger.” All the masked singers were asked by host Nick Cannon, “What were you most likely to be back in high school at Masked Prep?” Llama replied that he was most likely to be near firing cannons. Panelist Robin Thicke guessed a Jackass connection, maybe Johnny Knoxville (who was brought up last week as possibly being the Robot who was eliminated and was actually Lil’ Wayne). Panelist Dr. Ken admitted he still thinks llama is Joel McHale because McHale has a stinky llama face. Panelist Jenny McCarthy branched out on the “joker” clue that it may refer to the Lego Batman character, voiced by funny man Zach Galifanakis. Panelist Nicole Scherzinger was getting an easy going hippy vibe from the Llama, guessing Matthew McCaughney or Woody Harelson.

Miss Monster was shown in her clue package drawing the Monster from previous seasons, like Jack and Rose in Titanic and a prominently displayed queen chess piece. Miss Monster sang another female country hit, Bobby Gentry’s “Fancy.” She said, back at Masked Academy, she was voted most likely to be in the presence of royalty. McCarthy came out with a fresh guess of Mary Wilson, one of the singers in the Supremes, because Aretha Franklin was dubbed the Queen of Soul. Dr. Ken latched onto the “Draw me like one of your french girls,” line from Titanic and guessed that Miss Monster is french speaking songstress, Celine Dion. The audience yelled out their guess, “Miley Cyrus,” which was our Likely Choice last week. Miss Monster definitely had a smokey laugh, like Cyrus, even through voice distortion.

White Tiger revealed that, “Dancing heals my body after taking a beating.” He came out swinging with his rendition of Marky Mark and the Funky Bunch’s “Good Vibrations.” Scherzinger likes what the White Tiger has to offer even through the suit, she admitted she likes Tiger’s, “Big ‘C’… conviction.” White Tiger said he was voted most likely to go to the mat for a friend, which made Biggs go straight to WWF classic tag team members, such as Hulk Hogan. Thicke honed in on 4 in 7 as a clue and went back to football players who have been to 4 Super Bowls in 7 years, including already suggested Gronkowski again.

Kangaroo revealed she wants to be a good role model for, “my little roo,” punching back when it seems like the world is against her. Kangaroo appropriately sang “You Know I’m No Good,” by another fighter, Amy Winenhouse. Thicke admitted that Kangaroo is his favorite so far and Biggs agreed, “I forgot you were a giant kangaroo,” before he guessed Tatyana Ali. Dr. Ken guessed that Kangaroo may not be a basketball player, but a player’s wife, like Gabrielle Union. This could make sense given Kangaroo’s cryptic hint that she would have been voted most likely to be on a list with Seal and Mike Tyson— a messy list to be on.

Turtle revealed that he wants to break out of his shell, that if he wants to sing a love song he’s going to do it. He sang James Arthur’s “Say You Won’t Let Go,” and admitted he would have been voted most likely, “to hunt for booty, and I did often.” Dr. Ken guessed A.J. McClean, the panel disagreed. Thicke continued with last week’s popular guess, Billie Joe Armstrong. Scherzinger guessed Zac Efron.

Llama was revealed to be Drew Carey, who was our “Out There Choice” for Llama last week. So good job us and good job Masked Singer for keeping it fresh and keeping us guessing. Masked Singer said the clues were going to be harder this season and so far they are, the Llama’s Seattle connection confused the panel and the audience. Drew Carey said, he’s not from Seattle (he is famously a Cleveland son), the clue was referring to his spending a lot of time Seattle because he is a part owner of Seattle Sounders soccer team. His cannons reply to this week’s question was a reference to his military experience early in life. Carey expressed how grateful he was to be a Masked Singer, even though he is still on television all the time, he said the show was so much fun to do. Jason Biggs took a moment to tell Drew Carey what a fan he is and what a comedy inspiration he has been to Biggs.

Traits: Powerful, large, pushing himself to excellence, challenging himself, dancing and movement, skiing cow poster, 4 in 7, “go to the mat for a friend”

Out there choice: Dwayne “The Rock” Johnson, Baron Corbin

Likely choice: Billy Joe Armstrong from Green Day is getting bumped up

Out there choice: Adam Lambert and Zac Efron for his dating history

Out there choices: Miley Cyrus bumped down

Likely choice: Basketball wife Gabrielle Union singing Garth Brooks, granted we all sound like this warbling out “I got friends in loooow places…”

Out there choice: Bumped down  Iggy Azalea, Nicki Minaj