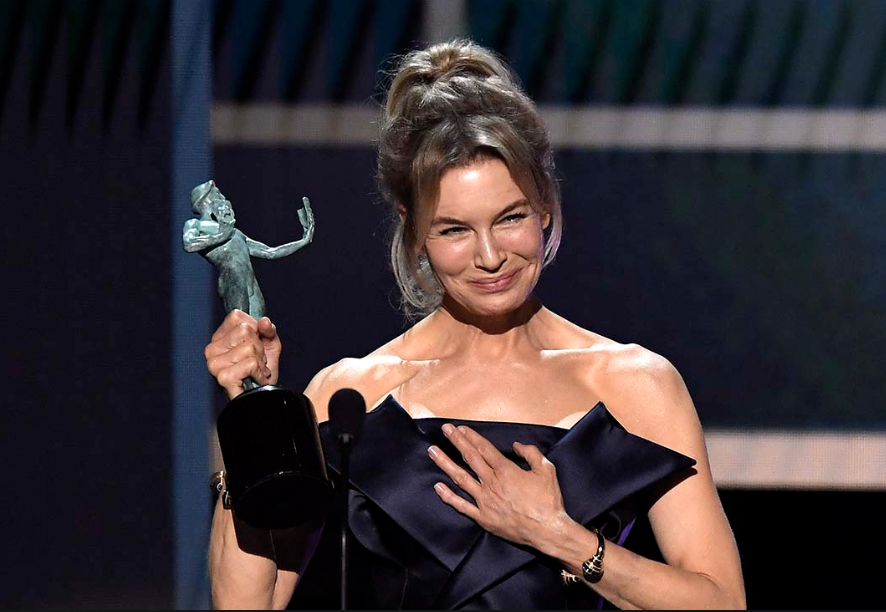 The 2020 SAG Awards show was a night to remember. Filled with predictable and unexpected winners, thoughtful speeches, and surprisingly minimal political mentions. This year, the award show was hostless, but instead had Christina Applegate, Cynthia Erivo, and Eugene Levy did a small introduction on their first roles as SAG actors. Levy killed it with his hilarious monologue on how he got started.

No surprise that creator and lead actress of Fleabag, Phoebe Waller, took home one of the first awards for Female Actor in a Comedy Series, giving a heartfelt speech to her cast and crew, and of course her fans saying, “The Fleabag team go home tomorrow, back to the UK. But I have to say, from the bottom of my heart, thank you for being so supporting of our show on these shores.” She has been sweeping the awards circuit withs wins for Lead Actress at both the Golden Globes and Critics Choice awards.

Other predictable winners were Brad Pitt, who won Male Actor in a Supporting Role for Once Upon A Time In Hollywood. “I have to add this to my Tinder profile picture,” he joked while accepting his award, as well as poking fun at director Quentin Tarantino’s notorious foot fetish.

Michelle Williams also won Female Actor in a Television Movie or Miniseries for Fosse/ Verdon, as well as Laura Dern winning Female Actor in a Supporting Role for Marriage Story. Both actresses delivered speeches about working for years in the industry and gaining inspiration from their peers.

The night was also filled with unexpected wins, like  Jennifer Aniston for Female Actor in a Drama Series, beating front-runner Olivia Colman. She gave a shout out to her multiple on-screen movie partner, Adam Sandler, who was snubbed from being nominated for Uncut Gems. Peter Dinklage also won his first SAG award for Male Actor in a Drama Series for Game of Thrones. He opted for keeping his speech short and sweet, thanking the cast, his wife, and Ireland. Another surprise win was Sam Rockwell beating front-runner, Russell Crowe, for Male Actor in a Television Movie or Miniseries for Fosse/ Verdon, beginning his speech saying, “I did not expect this at all.”

Leonardo DiCaprio presented Robert DeNiro with the 2019 SAG Life Achievement Award. When it came to politics, the always unfiltered DeNiro kept it mild and instead voiced about SAG-AFTRA working on equality in and out of work environment for every actor in the union.

Front-runner for Male Actor in a Leading Role for Joker, Joaquin Phoenix, who also won his very first SAG award in his career, dedicated his speech to his fellow nominees. He began his speech saying, “When I started acting again, and going to auditions, I’d always get to like the final callback, and I think many people know what that’s like,” he said. “And there would always be, like, two other guys that I was up against. And we’d always lose to this one kid. No actor would ever say his name because it was, like, too much, but every casting director would whisper, ‘It’s Leonardo.” The actor said to Christian Bale how great he was in every role he played, and “never turns in a bad performance.” Phoenix highlighted Adam Driver’s performance in Marriage Story as well as praising up and coming actor, Taron Everton with his role in Rocketman saying “I can’t wait to see what else you do.” He ended his speech by giving homage to Heath Ledger, also known for playing the Joker in The Dark Knight, for “being my favorite actor.”

The 2020 SAG awards closed the show with the most surprising and historical win of the night: Parasite, who won Outstanding Performance by a Cast in a Motion Picture, beating out Once Upon A Time In Hollywood. It became the first foreign film to win the SAG award in this category.

The theme of the 2020 SAG Awards winning speeches were all about the winners praising their peers and coworkers, starting from the bottom in commercials, and for most, working in the industry for over a decade. With the unexpected wins of the night, it could be anyone’s game as the Academy Awards approach.