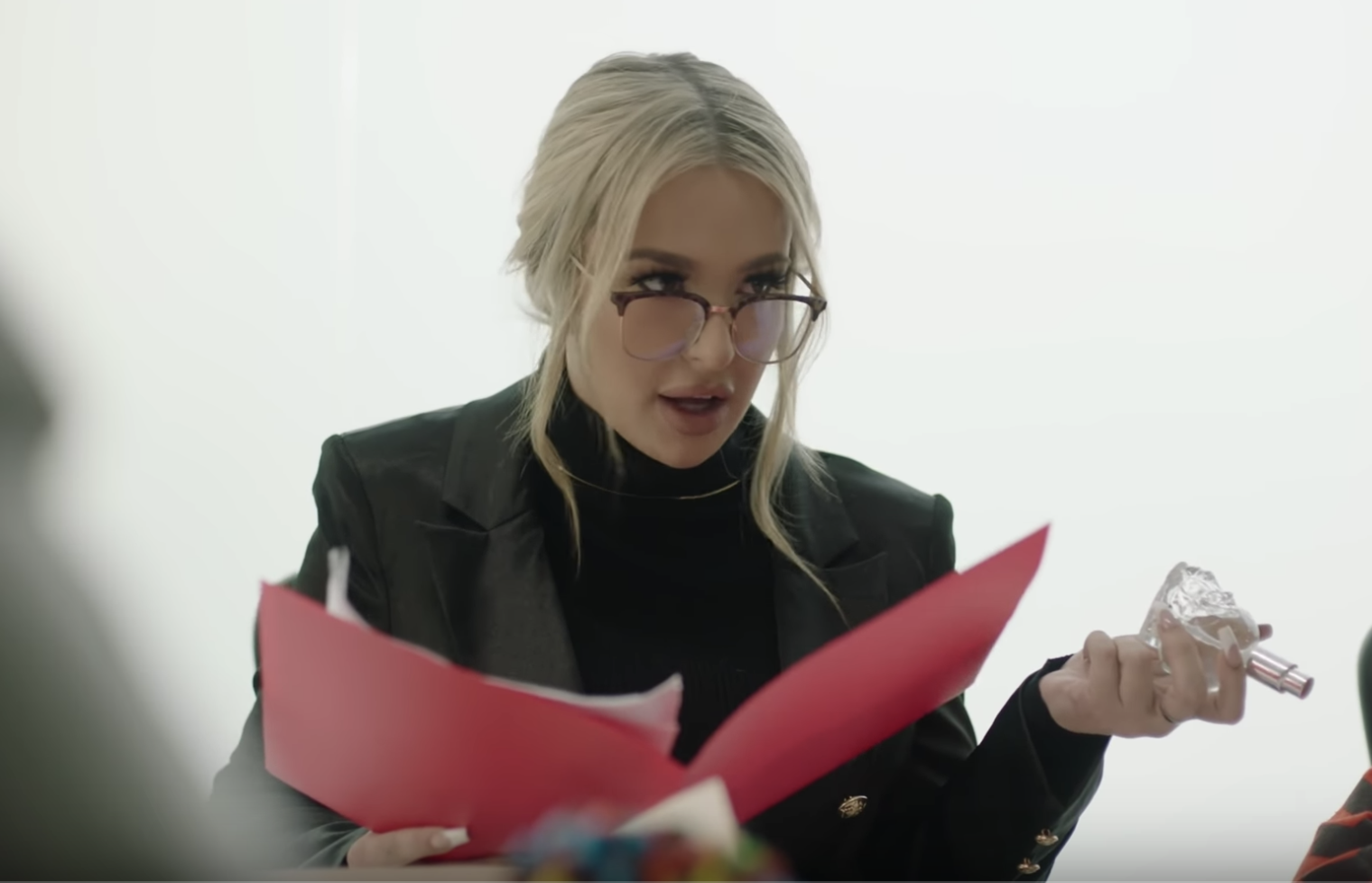 The perfume Tana Mongeau has been teasing for several days has dropped. TANA by Tana, a $48 skull-bottled fragrance, sold out in 76 minutes, which she announced through her signature screech on several videos. The commercial on her Youtube channel features the many faces of Tana trying to decide on a name for her first fragrance. The 12 Tanas brainstorm for three minutes, bouncing ideas off each other: Leader red hoodie Tana, black blazer marketing mastermind Tana, tube dress target demographic attracted by frangrance’s sweetness Tana, way conscious crochete and CBD Tana, dark hoodie/darker heart Tana, who is called out by pink sweater mean girl Tana, orange sweatshirt crying post TanaCon Tana, black beret director Tana, bloody shoes over-confident and well cared for Tana, sleepy blue teddy bear sweater Tana, vaping mellow Tana, and finally binging donuts Tana. After the commercial, Tana admits that she grew up poor and relied on stealing perfume, so she cannot believe she has a fragrance out. To tease the release of the commercial, she posted to Instagram, “TANA by Tana. My first perfume! As much as I know you’d expect it to smell like backwoods and sex- I’ve curated my perfect scent.. it will captivate you with the flirty top notes of Tahitian vanilla and a head turning base of vivid, sexy citrus. The heart having subtle notes of Argan oils will kiss your skin with it’s silky texture. Get ready to be drenched in luxury…”

Some critics on Youtube are questioning the luxury part of her statement—noting that a receipt for purchasing TANA by Tana names Merveilleux LLC as the company selling the fragrance. Though Merveilleux handles many celebrity fragrances, a partnership with a company built on churning out celebrity products, does not read as a year of hard fragrance collaboration that Tana claims her fragrance evolved from. Many detractors on Instagram, Twitter, and Youtube noted that the skull shaped fragrance bottle is available from several outlets already, Torrid (Siren’s Call Skull Perfume, $28.99), Hot Topic (Blackheart Skull Rollerball Fragrance, $2.99), and simply a supplier in China (bulk rate $.91 per bottle). When asked at LAX if there will be a men’s cologne soon, Tana responds, “I feel like putting a gender role on something like a scent is so dumb.” In true Tana fashion, she moves right on to the next drama, going into detail about having a gun pulled on her at a Las Vegas Airbnb, by the owner, “I think he was mad that a bunch of people from my show were there.”