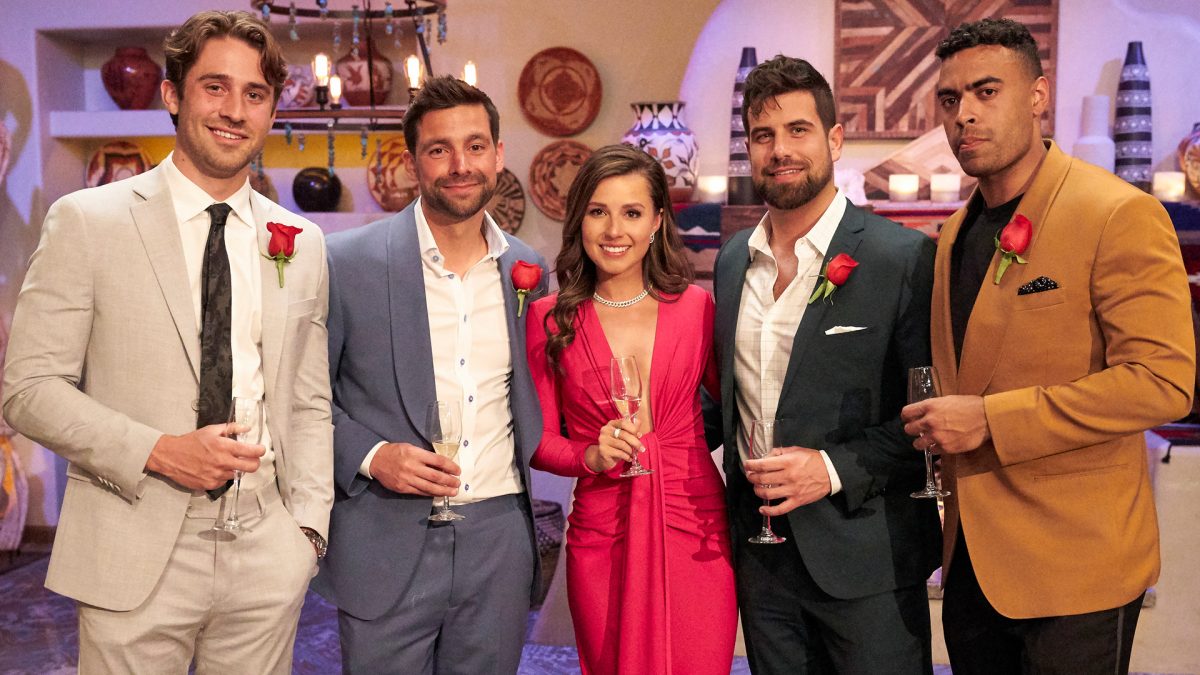 21 Jul ‘The Bachelorette’ Episode 7 Recap: Most Confusing Episode Yet

For this “Bachelorette” recap, it’s safe to say things got very romantic, and also very confusing!

In Katie’s eyes this has been the hardest set of dates yet, because hometown dates are next week. Whoever got a rose this week, Katie would soon be meeting their families.

At the start of the episode Andrew, Blake, Brendan, Greg, Justin, Michael A., and Mike P. were the remaining men. Let’s dive into the episode Bachelor Nation!

Romance in the Rain

To begin, frontrunner Greg and Katie finally got their chance at another one-on-one date. Their first one-on-one was so early on in the show, and they’ve only had group dates together since. Also, he is the first contestant to receive two one-on-one dates this season.

For their date, Katie brought Seattle to Greg.

The two enjoyed “Katie’s Market,” which is similar to her hometown market, Pike Place Market. Love was int he air as the two tossed fish, ate oysters, and made flower bouquets. The pair also got active as they played a game of football in the sun.

As the two ended their date with a dinner, things got serious.

“If I’m being honest, I feel like you’re gonna leave,” Katie admitted. Greg did confess to having insecurities and bad days, but nevertheless, he admitted he was falling in love with her.

And just like that Greg got a rose and was headed to hometowns. They ended their night with a passionate kiss in fake Seattle rain perfect for this rom-com like moment.

First of all, I’d like to say I literally never saw Brendan and Katie together, which is why when Brendan talked about their relationship I — like many — was confused because I didn’t even know they had one.

After Brendan found out he was on the the next group date, he went directly to Katie and asked why he didn’t receive a one-on-one. Sadly, Katie explained that her relationships with others were further along than theirs and there just isn’t enough time for them to play catch up. With that being said, it was time for Brendan to pack his bags and head home.

Now it was time for the group date.

This date consisted of the four men looking at an art exhibit of the female anatomy, and then being challenged to create their own art themselves.

It was clear most of the men were struggling in the art department! Michael A. made a funky sculpture of Katie from the back. Justin painted a beautiful rose, but then surrounded it with some questionably sloppy art work. Surprisingly, Andrew’s work was the best, as he drew someone eating sushi. As random as this sounds, it was meant to represent the love they have for food.

Lastly, Blake’s art was too explicit for TV and got fully blurred out. You can assume what he painted from that.

At the end of the group date, the men took the time to tell Katie how they really felt about her.

Blake revealed he wasn’t in love yet, but he was “so in.”Considering he got their late, I guess we need to give Blake some slack. Next, Justin presented her with another painting which led to a steamy make out sesh!

Andrew opened his heart and told her he was falling in love. He also mentioned he was offered to forgo his career as a professional European football player, meaning she might not have stability over where they would live if she choose to continue with him.

Lastly, Michael A. wanted to get some questions cleared up, but Katie jumped the gun and reassured him without him even having to ask.

“Every time I give you a rose, I’m also giving it to James (his son),” she said. This gave Michael all the reassurance he needed and he also gained the group date rose from it.

Luckily for Mike P., he finally got his first one-on-one date this week. Their date was a cuddle focused date led by Cuddle Queen Jean. Katie admitted that she “didn’t think [she’d] ever date a virgin,” but was looking to see if they a stronger connection still on the date.

Jean started it off by having them hug and connect through physical touch. The date continued to be a cuddle-fest, and Mike let Katie know she reminds him of his mom.

Despite Katie trying to connect with Mike, it was not happening for her and she sent him home before dinner.

Because two men got sent home early, that left Justin and Andrew competing against one another for the last rose. Katie expressed how hard this decision was for her to make, but she ultimately choose to eliminate Andrew.

Now, the final four are Greg, Michael A., Blake, and Justin.

After the ceremony, Katie was visibly upset and cried to Andrew as she walked him out.

She acknowledged that this was the first decision she made that she wasn’t fully sure of. There was obviously some doubt from her that she could have made the wrong decision, but Andrew left.

However, the next day Andrew stopped by her room for closure. Because their relationship was filled with smiles and happiness, he felt it should end that way as well. Their second goodbye felt the similar to the first, some uncertainty and sadness.

Before leaving her room, he slipped her a hadn’t written note that read “if you change your mind… I’ll be waiting.” Katie was overjoyed and ran to find him and passionately ran into his arms for a much needed hug.

She then asked if he would stay if he got the opportunity, and he surprisingly turned her down. This left me and I’m sure many people watching very confused because, didn’t he just leave her a note? Anyway she said if there was

“I want my future wife to choose me,” he explained. “I don’t want to go through this with her again. I don’t want to be standing at a rose ceremony, waiting for her to not choose me.”

While the note is very confusing but romantic, I totally agree with his decision to go. As two said their goodbyes they shared one last kiss and parted ways.

What was your favorite part of the episode? did we miss in this “Bachelorette” recap? Drop a comment below and let us know!

Be sure to check out our latest article on Kanye West dropping a new album this Friday.