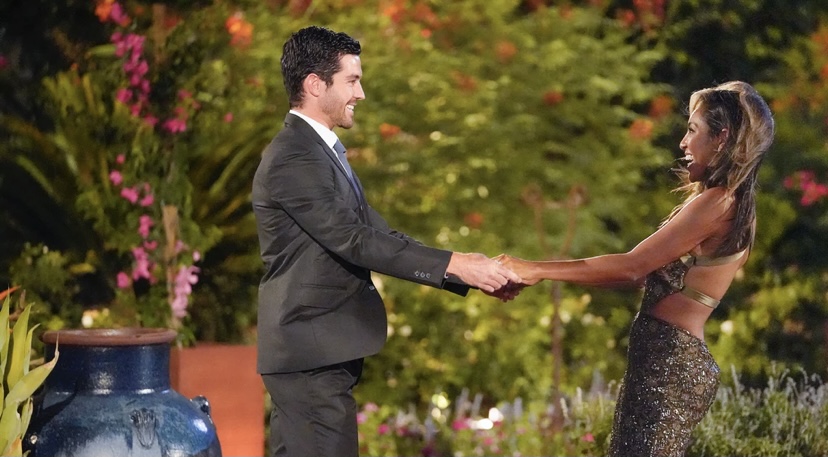 The beginning of the episode definitely feels like another night one, complete with a cocktail hour. Tayshia comes into the room of men, and you can immediately see all of their faces light up. Clare who? Obviously she is gorgeous, so it makes sense that the men would be excited.

“Did you really think that was the only group of guys that you were gonna meet tonight?”

Chris Harrison pulls Tayshia away to show her a limo, which is driving four new men to the resort!

Spencer was the first man to meet Tayshia. Tayshia looked as happy as Clare seeing Dale when he first came out of the limo. In my personal opinion Spencer is the hottest man I’ve ever seen. However, Spencer did not make such a great first impression on the other men. He walked into the room and asked, “So which one of you guys scared away Clare?” They were unimpressed.

Montell was the next guy to come out of the limo. He seems super nice and is yet another good looking man that Tayshia gets to meet. Peter, a 32 year old real estate agent, meets Tayshia next and he compliments her smile. Noah is a 25 year old registered nurse with a mustache, and I don’t even hate it. Mustache man pulls out a stethoscope so that Tayshia can feel his heart.

There was a super awkward energy between the new men and the old ones. Understandably, they were not too happy that they were going to have more competition for Tayshia’s heart.  Tayshia tells the men that there won’t be a rose ceremony because she wants to get a chance to get to know all of the guys. Spencer gets the first impression rose.

In the middle of the episode, Clare and Dale return. Chris Harrison sits down with them to get an update on their relationship. The two are still happy and in love. Clare says that she is hurt when people don’t believe that she and Dale didn’t talk before filming the show.

Chris asks what’s next for the couple? Marriage? Moving in? She answers kids, but Dale says marriage first. Can’t wait to see what happens with this relationship! 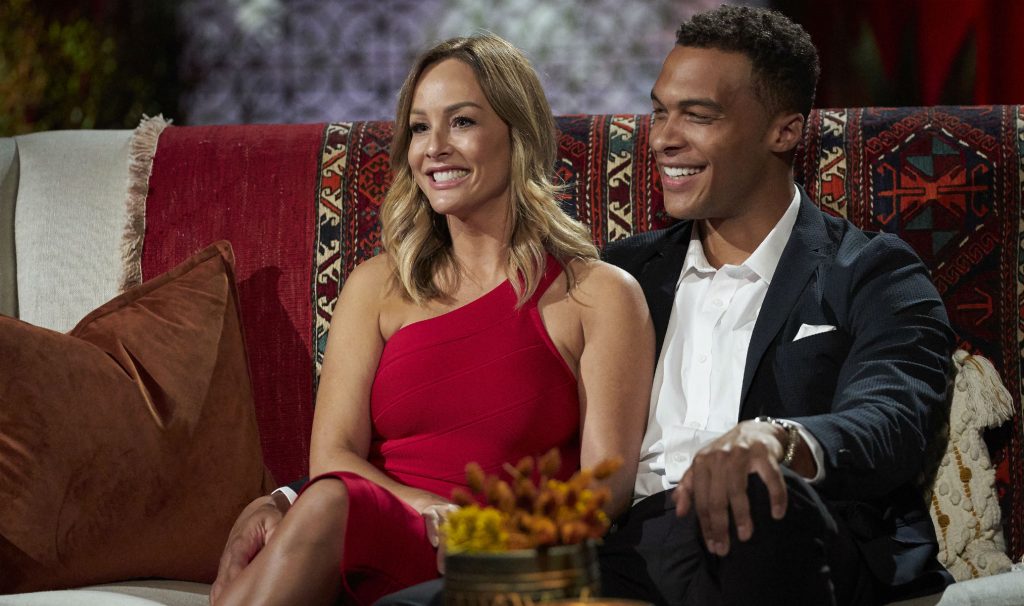 Blake, RIley, Zac, Jordan, Noah, Peter, Kenny, Eazy, Jay, and Spencer are on the first group date. They arrive at the pool for their date to see Tayshia coming out in her bathing suit. Her body is immaculate. Her boobs, OMG. Tayshia proves that she is going to have an amazing season and look flawless while doing it. She is so cool and just having a good time with all of the guys.

They play pool basketball in speedos, the winning team gets time with Tayshia. There is a lot of aggression. Some blood is drawn when Riley accidentally elbows Spencer in the pool. Riley tells the cameras, “he milked it a little bit, but that’s what pretty boys gotta do.” 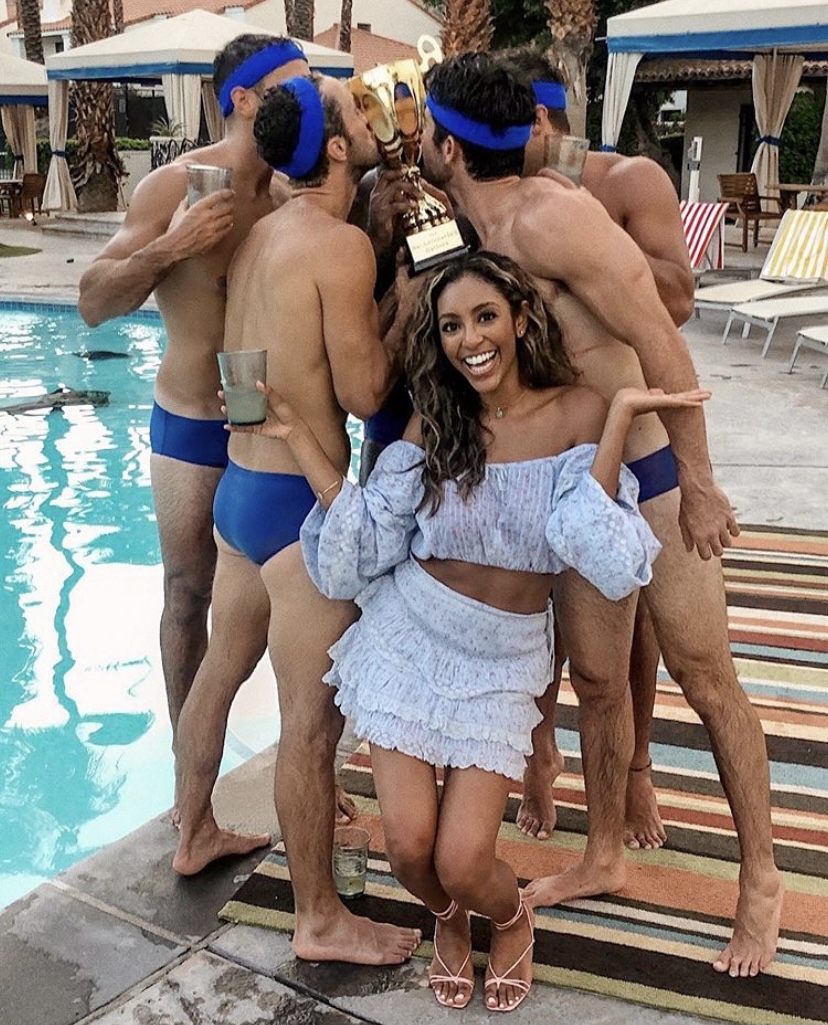 The Winners are Eazy, Zac, Riley, Kenny and Spencer

Tayshia gives all of the men her undivided and equal attention. It is really a breath of fresh air after Clare’s constant date cancellations.

I looove Eazy. He is so cute and has an infectious energy. When he and Tayshia talk, there is definitely good energy between them. Zac and Tayshia have a good conversation, and the chemistry between them is palpable. They are the first to makeout. She also vibes well with Kenny and Riley. Tayshia admits to Spencer, who is wearing a flower button up shirt,  that she was excited to see him come out of the limo.

I was mean to Kenny in the first bachelorette recap, but I take it back. I kinda like the way he wears a button up with the top three buttons open to show his tattoos. He was already growing on me, but then I loved him even more when he told Spencer that he kinda comes off as a dick.

Jason decides to go home. He goes to tell Tayshia, which was very big of him. He said that he let his walls down, and was in love with Clare. Jason thinks that Tayshia deserves someone amazing. Before leaving, Jason assures her that the other 19 men are definitely all in for Tayshia.

The One on One

Brendan gets the first one-on-one. Tayshia rides up on a horse, and let me just say, I do not look that good riding  anything. They rode around Palm Springs. I am once again asking why they are in Palm Springs in the summer doing outside activities. It is literally 120 degrees there. The date goes very well. At dinner Tayshia and Brendan learn that they were both once married. At the end of the date they watch fireworks go off. It was magical.

I am jealous of Tayshia. Obviously the men are always hot on the bachelorette, but never have I ever felt like I would personally date every single one of the guys. On top of that, she is one of my favorite bachelorettes ever. Can’t wait for the rest of the season! 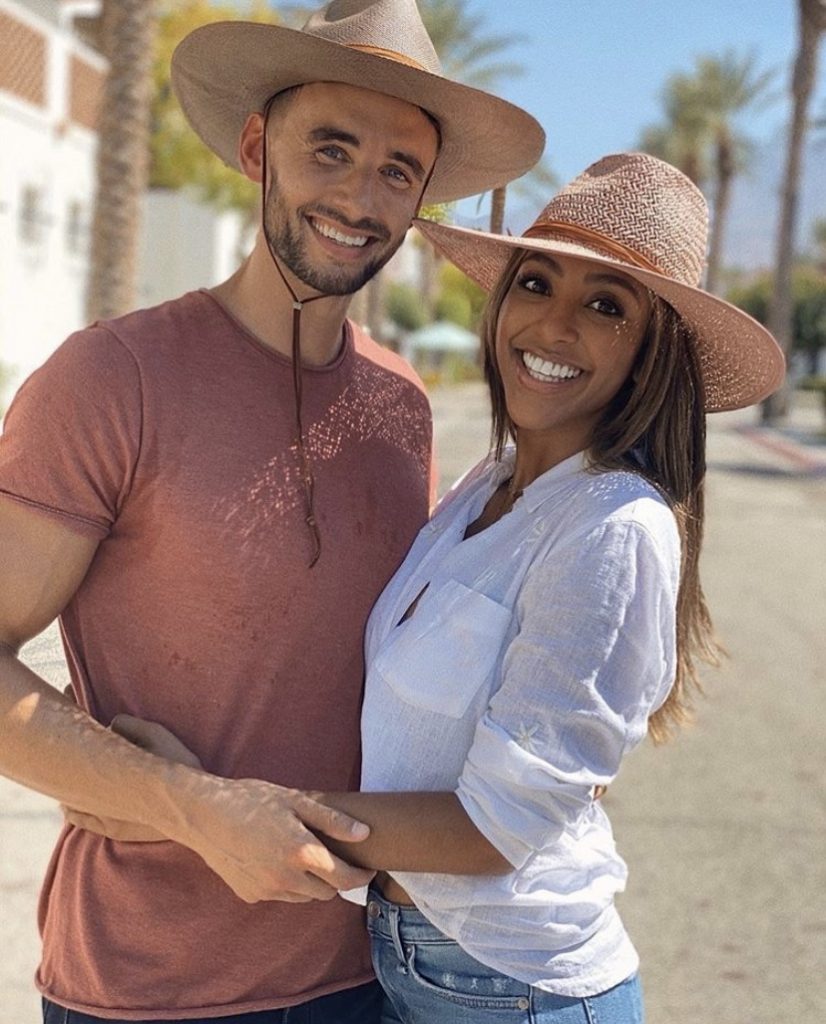 What did you think of episode 5? Drop a comment and let us know!

Be sure to check out our latest article on Liam Hemsworth’s latest romance!