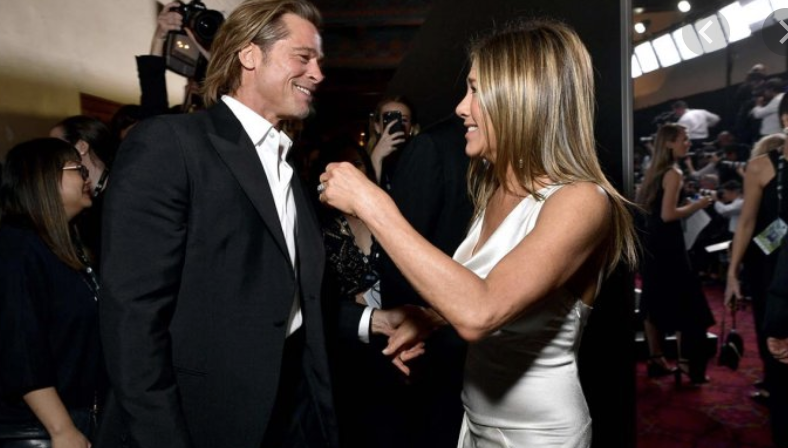 It’s been—what seems—like a hundred years since Jennifer Aniston and Brad Pitt were a thing. As someone who grew up in the 2000’s, if you had told me that I would be talking about Brad Pitt and Jennifer Aniston together as a whole I wouldn’t believe you. Yet, here we are now! Let’s take a look at how we got here and if there’s any hope for the two to reconcile romantically.

1994: Brad Pitt and Jennifer Aniston meet each other for the first time

In a 2001 interview with Rolling Stone, Aniston said she met Pitt for the first time back in 1994 because their managers were friends. At the time Pitt was still in a relationship with Gwyneth Paltrow.

1998: Pitt and Aniston go out on their first date

In that same Rolling Stones interview, Aniston says that they finally went on their first date in 1998, after being set up by their managers.

1999: Pitt and Aniston announce their engagement

After going public in September, Pitt and Aniston announce their engagement in November by going up on stage at a Sting concert in NYC.

Aniston and Pitt tie the knot in a luxurious Malibu ceremony. They had about 200 guests, 50,000 flowers, four bands, a gospel choir and fireworks, according to People.

Pitt made a guest appearance on the eighth season of Friends. Ironically his character hates Aniston’s character Rachel Green after she bullied him in school.

February 2004: Aniston plans to start a family with Pitt

In an interview with the Guardian, Aniston says that she’s ready for kids, including that she believes she could work pregnant. She had also planned at the time to travel with Pitt, while he filmed Ocean’s Twelve after Mr. and Mrs. Smith.

May 2004: Brad Pitt and Angelina Jolie meet on the set of Mr. and Mrs. Smith which ignites cheating rumors for Pitt

After months of reports of a breakup, Pitt and Aniston released a statement to People. “We would like to announce that after seven years together we have decided to formally separate. For those who follow these sorts of things, we would like to explain that our separation is not the result of any of the speculation reported by the tabloid media. This decision is the result of much thoughtful consideration. We happily remain committed and caring friends with great love and admiration for one another.”

May 2005: Photos resurface of Pitt and Jolie spending time together on the beach

September 2014: Pitt and Jolie get married

Pitt and Jolie get married in France after almost a decade together and multiple children later.

August 2015: Aniston marries Justin Theroux in an intimate ceremony at their home.

After two years of marriage, Aniston and Theroux released a statement to USA Today reading, “This decision was mutual and lovingly made at the end of last year. We are two best friends who have decided to part ways as a couple, but look forward to continuing our cherished friendship. Above all, we are determined to maintain the deep respect and love that we have for one another.”

The media goes into a frenzy after Pitt attended Jen’s birthday party at the Sunset Tower Hotel in Los Angeles. This is what initially got my attention that we might someday see a reunion between these two.

January 5, 2020: Aniston is caught laughing during Pitt’s speech at the Golden Globes

During his speech at the 77th annual Golden Globes, Pitt joked that he didn’t bring his mother as a date to the awards show because anyone he stands next to the media says he’s dating and it would be awkward. When the cameras panned to Aniston for a reaction hopeful rumors resurfaced even though Aniston calls him a good friend.

January 19, 2020: Pitt and Aniston have a sweet moment captured at the SAG Awards

The actors went viral again after photos of them, seeming to be congratulating each other on their awards from the night surfaced.