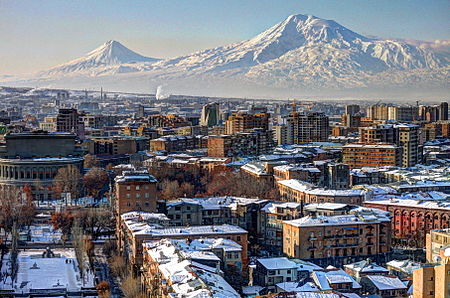 11 Dec Our Travel Guide For Armenia

Posted at 12:59h in Lifestyle, Travel by Gigi Manukyan 0 Comments

“Armenia remains a dream, a subject of stories; it is still, against all odds, a place.” -Anthony Bourdain, Parts Unknown

One of my favorite episodes of Anthony Bourdain’s Part Unknown, is “Armenia.” While my Armenian roots may partly explain my bias, it’s mostly Bourdain’s compelling storytelling of Armenia’s history that brought me to tears. As some of you may or may not know, Armenia has suffered tremendously during the last century. Firstly, under the Ottoman Empire; secondly, under the Soviet Union. In its first moments of independence, the Republic of Armenia grappled with the aftermath of the Spitak earthquake and the outbreak of war with its neighbor, Azerbaijan, over the disputed region of Nagorno-Karabakh. Despite the eradication efforts made against us, we, Armenians, have only grown more resilient. Recently, Armenia experienced a successful colored revolution, followed by an economic boom. The revolution opened the door to investors from all over the world, who have helped further develop the country. While Armenia still has a lot of issues to revolve, the country is moving in a positive direction. 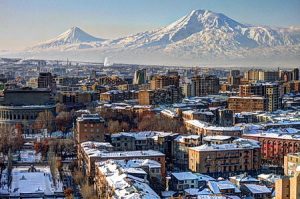 Let’s begin with Yerevan, the capital and my mother’s hometown. Hraparak, or Republic Square not only is this the center that connects all the main streets into one and is where the hotels are located, but the scene of the 2018 Velvet Revolution. Around 250,000 Armenians filled the streets to protest the election of corrupt then-President Serzh Sargsyan as Prime Minister. Since the turn of power to the people’s choice, Nikol Pashinyan, Armenia is rising on the world scene. You can visit the History Museum to learn more about the country’s ancient and recent past or the National Gallery for beautiful artwork by Armenia’s greatest artists. Located outside the museums, in the center of the center, is the beautiful water fountain that displays breathtaking water works to popular Armenian songs. My favorite is the performance under Charles Aznavour’s La Boheme.

Take a walk down towards Cascade, the giant stairway made of limestone. Built in 1971 under the Soviet Union, the stairways have eight levels, which are all accessible by foot. Cascade offers one of the best views of the city, so definitely come up here to see the sunset. Feeling romantic? Head over to Lover’s Park to spot young couples in love, or people committing adultery—it goes both ways. During the warmer months there are concerts that take place here—adding a whole new element of romance. I’ve had a summer romance here, and you should too! After, head on over to Karapich Lich, “Swan Lake.” Another great summer location; there are cafes wrapping the man made “lake.” Although closed during the colder seasons, they are open way into the late hours during the summer. This is also where Kanye West infamously jumped into the lake during his concert in 2015. Quite an unforgettable site.

Do not forget to go to Tsitsernakaberd, or the Armenian Genocide memorial. Despite taking place over a century ago, the Armenian Genocide is still a touchy subject for Armenians—one that has greatly shaped what it means to be an Armenian. Have tissues on hand. This is a very tough memorial to get through, but it serves a very important message for the Armenian people: We survived.

If you only stay in Yerevan, then you won’t get a taste of Armenia’s true ancient beauty. Armenians are one of the world’s oldest ethnicities and were the first people to adopt Christianity as their national religion. Yerevan celebrated it’s 2800th birthday this year, so I’m not kidding when I say the country is old. The Kingdom of Armenia was once known for its 1001 churches, with many  still scattered around the country. While many of these are across the border in Turkey, there are still many ancient sites to see in Armenia. The most popular is a day trip to both Garni and Geghard, so kick off day 2 of your Armenia trip here. The Temple of Garni is the only standing Greco-Roman building in Armenia—an ode to Armenia’s pre-Christian history. Outside Garni, locals sell homemade gata, titu lavash, and cheer. After Garni, head over to Geghard, a monastery in the Kotayk province. What makes Geghard is its medieval architecture; the monastery is built in the mountain and surrounded by cliffs.

On day 3, head over to Khor Virap. Situated along Armenia’s border with Turkey, Khor Virap is an Armenian monastery that once held Saint Grigor Lusavorich in a cell at the bottom of a pit. You can go down the cellar, and see for yourself the terrible conditions Lusavorich lived in. On a clear day, you can even see Mount Ararat in the distance—a sad reminder of what once was the Kingdom of Armenia. After,  head over to Areni to taste Armenian wine before making your way towards Jermuk, home to Armenia’s famous hot springs.

Tsaghkadzor is definitely one of my favorite “touristy” places in Armenia. It’s an amazing place to visit year round. You can picnic here in the summer and ski in the winter. A short drive away is Lake Sevan—Armenia’s most popular lake. Albeit, will not recommend swimming here. If you enjoy camping, then Lake Sevan’s campground is the place for you. If not, then have a traditional Armenian meal here along the boardwalk.

Bargain Around the World Flight Deals. Save up to $20** off with promo code – ATW20. Book Now!

Vanadzor is Armenia’s third largest city, and my father’s hometown. Unlike Yerevan, Vanadzor has not changed much since the Soviet days. There are even abandoned Soviet factories still scattered through the region. Lacking in modernity, Vanadzor makes up in its scenery. I love the drive from Yerevan to Vanadzor, which takes around two and a half hours. On the way, you can stop to take pictures at the Armenian letters and the giant cross made out of smaller crosses (because this is super Christian Armenia). Once in Vanadzor, go for a hike in the mountains. There isn’t much to do here nightlife wise and you can see the entire city in an hour, so I suggest heading over to Dilijan. Another spa town, Dilijan is quite peaceful and scenic. Dubbed “Armenia’s Switzerland,” Dilijan is a must see on your Armenia travel guide. From Vanadzor you can also go to Haghpat Monastery. Although not as popular as the other monasteries on this list, Haghpat is equally as beautiful—minus, the frightening drive there.

Did you know that Armenia has a volcano? I didn’t know either until I googled “Mount Aragats” and saw that it was a volcano as well! Mount Aragats is the highest point of Armenia, and probably the coldest place in the country. There are legends surrounding this mountain route. Allegedly, the water here flows not from top to bottom, but from bottom to top. Some spots the car will change speed—even move when the driver isn’t driving. Take in the beauty of Kari Lich. I promise it’s worth the trip!

Situated in the southernmost part of Armenia near the Iranian border is Tatev Monastery— one of the most breathtaking places in Armenia. I’ve been to Armenia many times over the years, but I’ve yet to visit Tatev. This may or may not be in part due to the long from Yerevan. However, I had to include this gem on this Armenia guide because it is definitely a bucket list item. During medieval times Tatev Monastery was home to the country’s greatest scholars—housing the University of Tatev—and played a pivotal role in shaping the country. After you take in the beauty of the monastery, ride the Wings of Tatev, the world’s longest double-gauge ropeway.

If Armenia wasn’t on your bucket list, then I hope it is now. Come visit my motherland and experience its mysticism first hand. You won’t regret it!